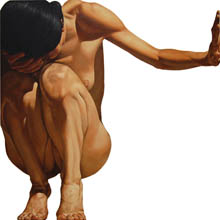 In 1964, Supreme Court Judge Potter Stewart made a now mythic ruling on obscenity, stating, “I shall not today attempt further to define the kinds of material I understand to be embraced ... but I know it when I see it.”

“I know it when I see it” has become the standard response when art becomes pornography, as the line between the two is as thin as the fabric on the underwear at Babeland.

I would propose that we update this now-maxim with: “I know it’s pornography when I receive a SPAM e-mail about it.” That I actually received an electronic message about Brian Biedul and Alejandro Gehry’s Raw Space muddies the matter a bit as their work teeters on the border between.

Gehry, son of the Disney Concert Hall’s architect Frank, uses oils to created overlapping lines of clear eroticism. Untitled presents a woman’s head licking a hand with an exposed breast off to the side, the aforementioned hand eventually stroking an exposed vagina.

Biedul’s work presents almost photographic nudes (actually expertly contoured oils) that play as David Blaine’s adult show – a muscled man or equally-toned woman push at the sides of the canvas as though confined by the space in which the artist placed them.

Square #1 has a woman, her breasts and mons pubis exposed, actually leaning against the side of the frame. Rectangle #1 does the same with a man, twisted in a position where he almost seems to be begging to escape this canvas prison – it’s almost a form of bondage that they can’t escape from artist-defined walls.

Art
Homeless artist wants to ‘be the light’ on LA’s skid row
1,097 views

Art
Muralist Robert Vargas is painting a towering history of LA above the traffic
4,937 views

Art
French artist goes back to the source of the City of Angels — the L.A. River — for his new project
3,673 views