Break from the BCS: November Madness? Sure… 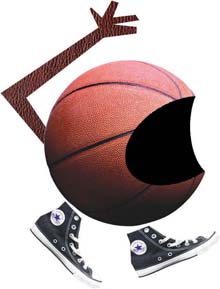 With the Bowl Championship Series needing the next few weeks to sort itself out, there’s no reason not to contemplate March Madness during the frequent, interminable, repetitious commercials plaguing the “so what?” football game you’re watching.

Maybe this year we’ll finally get a No. 16-seed toppling a No. 1-seed. Princeton came oh-so-close to making it against Georgetown in 1989, falling slightly short at 50-49.

This year we’ve seen a spate of upsets, never mind that two of them were classified as “exhibitions.” Grand Valley State over Michigan State, Findlay over Ohio State, Gardner-Webb over Kentucky … why not in March?

Surely there’s no need to tell you that I’m a Tar Heel. The Duke Blue Devils are seeded No. 1 in the West Region, opening against TBA (does it matter?) at the Long Beach Arena.

I won’t have to go far to see it in person; moreover, the pain of the crushing, unbelievable defeat will be exacerbated by an emergency landing in Phoenix (blinking restroom light), a diversion to Detroit via Salt Lake City (after a holding pattern, due to fog) and all luggage being sent to Kuala Lumpur – in itself a handy way to describe the luggage.

This is a morning game that most people don’t care about. The arena is half-full at the game’s start; it will fill appreciably in anticipation of the match-up to follow.

It will fill belatedly as those making their way down the 405 swear at traffic for the umpteenth reason. Something is brewing. Didn’t Loyola Marymount blow out defending champion Michigan on this very floor years ago?

For those tuning in to other regional action, the gray and white mini scoreboard in the corner shows a pesky team significantly falling a few times, only to rally and tie things up. It’s not halftime yet, so we get a minimal tease from the network.

This is one of those games that gets a longer-than-average, live look-in. The first time you’re sent to Ian Eagle and Jim Spanarkel, they’re just coming out of a time-out; Krzyzewsky is a little animated for the first half and the crowd is getting behind the underdog. People in sports bars demand that the sound gets turned up in order to drown out customers clueless to basketball.

In the middle of the wash of the first half, a power forward measuring 5-foot 7-inches steps up to the line for a one-and-one. The unusually high arc of the first is matched by the unusually singular scream of a cheerleader, futilely trying to distract the forward.

Swish. This is such a beautiful fantasy that the shooter’s teammates don’t bother to distract him, giving him “five” and getting his palm wet. The cheerleaders along the baseline say “whoosh!” as they throw down their pom-poms.

The second free throw bounces 12 times (including three on the flange) and goes through. The cheerleaders wisely don’t “whoosh.”

With three minutes remaining in regulation, the point guard walks the ball up the floor, holding up two fingers for the offensive set. The crowd’s roar builds up. Three-pointer from beyond the top of the key. Madness.

Except for those tortured with having to watch their home team’s game, everyone was sent some time ago to Jim Nantz in New York, who breathlessly told us that most of us were going out to Long Beach. There’s a magic in the air not felt since a teary, heartbroken Bo Kimble made his first free throw against the Wolverines, left-handed in Hank Gathers’ honor.

Below the mega-font headlines in the Sports pages, the story unfolds:

“LONG BEACH — For almost 40 minutes the 16th-seeded San Diego Toreros raised the roof at the Long Beach Arena, answering every blow the top-seeded Blue Devils could deliver. Then, as time expired, Trumaine Johnson brought the house down.”