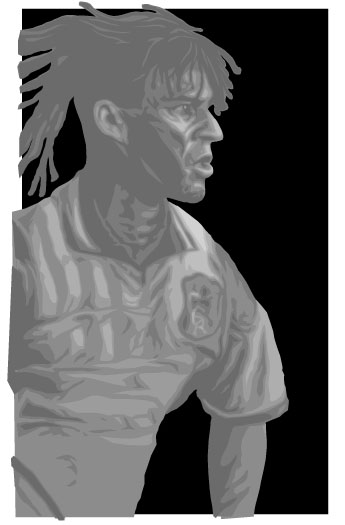 Less than 10 months after sending shockwaves through the international soccer scene by signing David Beckham, the Galaxy made another out-of-this-world move in hiring coaching phenomenon Ruud Gullit. The 45-year old Dutchman will replace Frank Yallop, who recently left the Galaxy for a second stint coaching the San Jose Earthquakes.

“We feel we have found our man,” says Galaxy General Manager Alexi Lalas. “We wanted a strong personality; someone with confidence, someone with leadership and someone that was right for the time. It is a wonderful day for the Galaxy.”

Born in Amsterdam, Gullit is a recognized name in world soccer. He was a star striker on the Dutch national team that won the 1988 European Championship.

Gullit then joined AC Milan with Dutch teammates Marco van Basten and Frank Rijkaard, where the trio won back-to-back European Cup (now called Champions League) titles in 1989-90. The championships came at the height of Gullit’s career, when he was named “World Player of the Year” in 1987 and 1989 by World Soccer magazine.

Since, Gullit has coached the likes of Chelsea, who won the FA Cup under his tutelage, and Newcastle. He also had a brief stint coaching the Dutch club Feyenoord in 2004-05, before turning to television as a soccer analyst.

Gullit is probably most popular, however, for is his coining of the phrase “Sexy Football.” While the Galaxy definitely hopes Gullit brings “Sexy Football” to Major League Soccer, the move signifies the team’s attempt to be attractive internationally.

“We’re trying to build the Galaxy into a world-class brand,” says Tim Lieweke, chief executive of AEG, owners of the soccer club. “We are on the world stage. We understand the pressure [and] attention this team is going to get. This was an opportunity to find a coach who can handle this kind of pressure, and actually loves this kind of pressure. I think we found someone that will be the most important person in that locker room.”

“That phrase haunted me for years,” says Gullit of the catchphrase, though he is definitely looking forward to turning the Galaxy into a group of contenders once more.

“It was an easy decision to take this job,” he says. “Soccer is a growing sport; it is something that has potential to be huge in America. I am proud to be in the beginning of that process. It’s a huge challenge, but we will do everything in our power to win.”

A huge challenge indeed, but with the likes of Beckham and American star Langdon Donovan, Gullit definitely has the star power to help him transition into America’s football … er, soccer. Also helping Gullit’s transition is Cobi Jones, who, only weeks after retiring from playing in the MLS, will join the team as an assistant coach.

“I plan to be very active as an assistant coach,” says Jones, who has to worry about his own transition to coaching the very players he played with just a few weeks ago.

From the player’s perspective, the signing is pleasantly welcomed, as Gullit commands instant respect as a former star player on the international stage. He is also a proven winner – something Donovan appreciates.

There is already immense pressure in being a professional sports organization in Los Angeles. With Gullit joining Beckham, the expectation to win at home is even greater. As the team now has international aspirations, time will tell if the star power of the Galaxy is enough to create a legitimate solar system known as American soccer, or whether it will all end in a Black Hole.