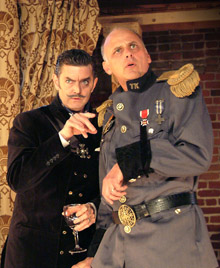 The play is about a secret meeting of world leaders in 1914, on the cusp of the First World War. The world is on the brink of chaos, while millions of lives hang in the balance.

Rock is assuring audiences an absurdist view on the events leading up to the Great War (obviously it wasn’t called World War I back in the day, because no one realized that there would be another). The play combines some bizarre twists and fantastic characters; the ghost of Edward VII and a talking wildebeest are among the supporting characters of this offbeat dark comedy.