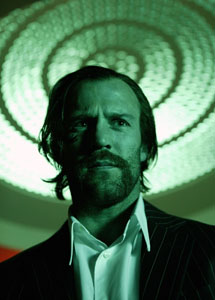 It may have rocked-out on shelves for two years, but finally Guy Ritchie’s psychological mob thriller Revolver is coming to theaters. This movie takes the same tough talking men that make Ritchie’s past films so great and gives them an injection of “self-help” philosophy.

Jason Statham (The Transporter) plays Jake Green – a bad boy who winds up in jail after some pretty shady behavior. Following seven long years in the clink, he’s released and back to his old tricks again.

He attempts to use the criminal knowledge that he learned from two fellow inmates on the outside world. Jake goes after the man who put him in jail (Ray Liotta) and tries to pull off the ultimate revenge against him. But that plan only lands him in bigger trouble.

Luckily, this low-rent gangster has two dodgy guardian angels – Avi (OutKast’s Andre Benjamin) and Zach (“The Sopranos” Vincent Pastore) –watching out for him. They work in questionable ways to keep their new buddy safe from harm. But in doing so, they hold a very clever secret of their own – one that unfolds with all the stylized suspense of a Hitchcock classic.

Many may wonder what took so long bringing this version of Revolver to the big screen. Surely, it was a combination of things.

There were whispers – after the abysmal performance of 2002’s Swept Away (Ritchie’s failed collaboration with wife Madonna) – that his career was hanging on by a thread. The wrong follow-up could very well be a nail in the coffin of what appeared to be a promising long-term stay in the film industry.

Enter Revolver. After initial screenings in 2005, it was determined that the movie was a bit too cerebral for some audiences.

The themes of “man vs. himself” and “the ego” were not easy abstractions for many to comprehend. Even Statham, its star, had a hard time trying to wrap his head around the complex subject matter.

“The mind hates the concept of the film,” confesses Ritchie. So, it was back to the drawing boards. Commentary by some of the finest philosophers and doctors in the world like Deepak Chopra was added.

This was done to clarify the surprise ending and explain it in a way that would be easy for everyone to understand. But to hear it from his leading man, that’s simply the Ritchie modus operandi.

“The script’s been spun on its head so many times but that’s the way Guy works,” says Statham. “He’s got such an engaged mind. He had so many amazing, colorful characters.” Just like Snatch and Lock, Stock and Two Smoking Barrels, Revolver has its own cavalcade of Savile Row-clad gangsters, tough-as-nails hitmen and ’70s porn-inspired ladies. Ritchie even takes his vision one step farther into weirdsville by naming the Liotta character (a paranoid, Speedo-wearing pretty boy) Dorothy.

But the best and brightest character of the movie is its Vegas-y bravado. The impetus behind such a flashy locale is easily explained.

“If the devil owns anywhere,” jokes Ritchie, “it’s Vegas!” Revolver is unlike any other crime film ever made. True to form, fans of Ritchie’s past efforts are sure to love it for its snappy dialogue and visual teases. But this newest effort shows that he’s looking beyond what people know of him and attempting to do something truly different.

“[Revolver] was a culmination of concepts, which I boiled down to one, the con of all cons,” he says. “I’m fascinated by how you can trick the mind both collectively and individually. I thought this concept was so audacious, so radical and so ubiquitous that I had to somehow make a film out of it.”

As for his future efforts, Ritchie will direct The Gamekeeper (based on the Virgin Comics series), a remake of The Dirty Dozen, as well as the much-awaited RocknRolla starring 300’s Gerard Butler and Ludacris.

This is one filmmaker with such a love of his genre (violent film noir), that one has to wonder if he’d ever take his signature style and craft a story centered around a female protagonist. After all, Ritchie admits that films like Luc Besson’s La Femme Nikita are pretty badass.

He ponders the possibilities and decides that he’d be agreeable to such a project. Yet, when pressured for a name (like ... the missus, maybe?) he doesn’t miss a beat.

“That’ll get me into a LOT of trouble,” he says, while boyishly scratching his head.