The Walker: Steps Out of the Shadows and Into Film History 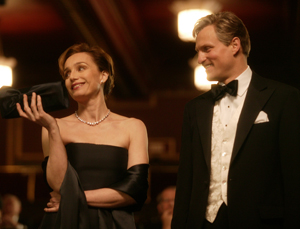 The story began with American Gigolo (1980), starring Richard Gere. Gigolo took a searing look into the life of a narcissistic guy, who sells his body for money. Next came Light Sleeper (1992), starring Willem Dafoe and Susan Sarandon. Here, his signature protagonist is in his 40s and contemplating something much greater than his current existence.

The Walker grabs the common thread of each of those characters and completes the mosaic. Schrader’s "lonely man" has now reached the ripe old age of 50.

His final incarnation is the superficial “BGF” (best gay friend) of a slew of Washington, D.C. political wives. It is his task to provide them with companionship, walking them to and fro.

Actor Woody Harrelson plays the title role. His character, Carter Page, is a stylish scion of a powerful Virginia family.

He is also openly gay – a lifestyle that still tends to raise eyebrows in Washington. When one of his lady friends (Kristin Scott Thomas) discovers that the man she has been trysting with is dead, it’s Carter that steps in to clean up the mess. That loyalty soon lands him in hot water with the Feds, and it will be up to Carter to clear his name.

Although The Walker is set in Washington, it wasn’t exactly Schrader’s attempt to make the project a “political” thriller.

“I first wrote it the last year of the Clinton administration,” he begins, “but every time I went back to rewrite and update the script, I had to take into account a progressively conservative and vindictive political environment.”

In the film, Carter makes the astute observation that the last two places in American society where lifestyles are most harshly critiqued are Salt Lake City and Washington – an opinion straight from this groundbreaking writer’s mind.

“The script became more political only because times were changing,” he says.

Harrelson makes a startling transformation in the role. Known more for his comedic role as Woody on the long-running sitcom, “Cheers” (and lately for his love of hemp), one might not draw an immediate parallel between the actor and a dandy gentleman.

Yet, when Schrader’s first leading male backed out of the project, it was Harrelson’s agent that asked for consideration of his client. The star and the director met, sealing the deal. While that casting choice may have involved a slight leap of faith, Schrader would certainly have no problem finding actresses to play his Grandes Dames. He is quite open about his knowledge of Hollywood turning its back on actresses of a certain age, so it wasn’t a matter which actress was available; It was sheerly a question of who he’d want attached to which part.

“[It was] like going into an orchard and seeing which one was ripe,” he jokes.

That cornucopia of luscious names and faces concluded with the casting of cinematic legend Lauren Bacall. She plays Natalie Van Miter – the tell-it-like-it-is socialite.

Next is actress/comedienne Lily Tomlin (I Heart Huckabees) who dishes up an icy cold shoulder as Abigail Delorean – the wife of a scheming politician. And finally, Schrader’s real-life wife Mary Beth Hurt is cast as Chrissie Morgan – a woman whose glowing smile and charm barely mask her disdain for the socially unacceptable.

Even Harrelson bows to the impressive nature of his female costars, affectionately referring to them as the “gaggle of goddesses.”

To Schrader’s credit, he has managed to stay incredibly relevant throughout his career. Ask any film buff to list their top 10 favorite American movies, and you will more than likely see Taxi Driver and even Raging Bull (a book-to-screen adaptation that he co-penned) among the names. Even more shocking is the fact that Schrader was barely into his 30s when he delivered those projects.

He confesses that one of the driving forces behind his gritty dialogue and realistic portrayals of somewhat disaffected men and women is his strict religious upbringing. He has built a startlingly profound career around rebellion.

For those willing to join this writer-director on his latest journey, it will definitely be a thrilling joyride.