Perez Hilton: Spreading His Empire Like a Lovely STD 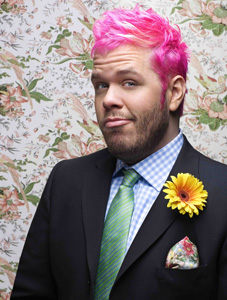 “Don’t drink and drive. Don’t do any hard drugs. Make sure you graduate. Always wear a condom. Read perezhilton at least five times a day every day seven days a week.”

This is brotherly advice from Perez Hilton, Internet phenom and creator of one of the fifth most popular Web site among college girls (according to the Anderson Analytics, October 2007).

Twenty-nine-year-old Hilton is quite fun to talk to. As if you were gossiping with one of your close pals, the Miami-born blogger transfers his chatty persona and catty attitude to his site. He’s not afraid to share his opinion about everyone, and he draws comic scribblings on photos of people like Lindsay Lohan and Amy Winehouse.

A self-proclaimed workaholic, he updates his site pretty much 24 hours a day. That’s what keeps nosy parkers coming back for more. According to him, no one’s really doing what he’s doing or how he’s doing it.

“I have my exclusive stories that I break,” he begins. “I also throw political things in there. I push music a lot. I go to the events and see the celebrities. I offer a unique perspective, point of view and experience that no one else offers.”

He’s right, and thus, Perez Hilton is fast becoming a brand name, like his favorite – and least favorite – person to write about Britney Spears, or his idol Madonna. He’s currently working on “What Perez Says,” his own TV show for VH1, doing the Web site, filming a movie, working on a book, doing concerts in several cities, starting to produce and trying to start his own record label.

“I’m trying to build my brand and build my empire,” he proclaims. “I want to be the next Oprah or Martha Stewart-type. Take the Perez brand and spread it around like a lovely STD.”

Hilton could have never imagined he would secure the kind of fame or lifestyle he has today.

“I could have never envisioned my future because no one was doing what I’m doing when I was growing up,” he explains. “It’s one of the great things about it. I led my own way and was a pioneer in my field. Not to make myself sound very grandiose or anything, but I was one of the first doing what I’m doing. And that’s a really good thing. I would always encourage everyone to be creative, think outside the box, be fearless.”

In fact, despite threats to his life, Hilton says he isn’t afraid of anything except death. “I’ve definitely been threatened,” he reveals. “It happens regularly. It’s one of the hazards that come with the job. I’m a big boy. I can take it.”

Plus the perks of Hilton’s daily grind are fantastic. He wouldn’t have it any other way. “My favorite part about my job is just being my own boss and not having anyone tell me what I can or cannot say,” he says. “It’s really awesome to just be able to pick up my laptop and go anywhere I want, whenever I want. It’s the ultimate dream. You have the incentive to work really hard because when I do work hard I’m working for myself. I’m not working for the man. I’m not a slave to the machine.”

Hilton’s personality is a perfect match for what he does. In grade school when you take a career aptitude test there’s no result that will tell you you’re meant to be a celebrity blogger. Hilton had to figure that out for himself and make his misfit persona pay off. “I was always the crazy one, the outcast, the misfit,” he shares. “I did really well in school. I was in the honors program. I was a straight A student. I went to NYU on a full scholarship. But I was the one to push people’s buttons and get people talking. I wasn’t afraid of a little controversy even back in high school.”

It’s well known that Hilton makes his living from controversy.

“I always love days when you have a really big story that happens,” he says, “like when Lindsay Lohan was arrested for the second time in July or the day Anna Nicole Smith died. It’s like a tsunami, and you have to just ride the wave and can’t get crushed by the tsunami.”

And when bad news like this breaks, does Hilton ever feel like he was just waiting for it to happen?

“Yeah, definitely,” he assures. “I totally predicted that Lindsay would end up in rehab again, that Britney would end up a mess. These people, these train wrecks fulfill their own prophecies.”

One might confuse Hilton’s love of train wrecks for malice with a hint of evil, but he also has a soft side, sort of.

“Of course I feel bad when bad things happen to most people,” he admits. “Except for the people that deserve it,” he snickers.

So who is his favorite train wreck of all?

After majoring in drama (figures!) at New York University and living in New York for six years, Hilton hightailed it to the West Coast.

These days Los Angeles is his playground, and Hollywood his backyard. In his down time, which is rare, when he’s not sleeping, he even plays “Celebrity” with his friends.

“My favorite thing to do when I hang out with my friends is play ‘Celebrity,’” he says. “It’s a really fun game where you put a bunch of celebrity’s names in a bowl, and then you have to guess who the person is without actually saying their name. I’m really good at it and very competitive.”

Of course he is. Can you imagine Hilton playing “Celebrity?” What hilarity must ensue when he acts out Britney, Lindsay or Amy?

With his newfound status as a celebrity in his own right, Hilton is taking the next step to stardom.

“I do have aspirations to be an actor,” he says. “Thankfully, my life is coming full circle now, and I’m going to be in a movie, which I’m very excited about. That will come out sometime in 2008. I shoot it in December. It’s a small gay comedy called Another Gay Sequel. It’s Part II. The first one was called Another Gay Movie. It’s a spoof of all the gay movies.”

And there’s his TV show, which he has total creative control over.

“It’s so fun having my own show where I can have some of my favorite people on and just do whatever I want. It’s awesome.

“I never set out to become friends with celebrities,” he continues. “Sometimes it just happens. Everything with the Web site and with my life just happened. It evolved. It’s all been a very organic evolution. It happened, and then I make sure that I work really hard and live up to it.”

With so many concerts, events and parties to attend, is there one event that stands out for Hilton as a lifetime highlight?

“I’ve been very lucky and I’ve got to experience really cool things,” he says. “It’s funny how for me the best experiences always come back to music. Two of the most fun moments I ever had doing this Web site and everything since then ... I remember going to a Madonna concert, and Madonna’s best friend Ingrid saw me and gave me a pair of front row tickets and that was such an upgrade from where I was sitting in the shitty seats. Then I went to a Christine Aguilera concert recently and she saw me in the audience and picked me to come up onstage.She tied me down and was whipping me and sang an entire song to me in front of 20,000 people.”

And what would an interview with Perez be without asking for his predictions for 2008?

2) Lindsay Lohan will end up back in rehab.

Oh, and he can’t even begin to predict anything with Britney Spears.

“Because her life defies all sorts of logic and everything.”

The next episode of “What Perez Says” airs Dec. 13 at 10 p.m. on VH1. For more information, visit www.perezhilton.com.