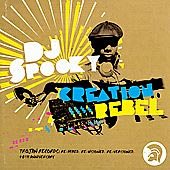 Intellectual property laws are a bunch of poppycock that do little more than stifle artists and limit creativity. That’s why I like DJ Spooky, who has spent his career excelling in what he terms “cut-paste and mix culture:” the alteration of pre-existing material to create something entirely new and distinct.

Participating in this “borrowing” art form has become increasingly difficult due to recent crackdowns by the recording industry. Luckily, Trojan Records granted Spooky full access to its vast archive of reggae music when it enlisted him to handle Creation Rebel, a 40th Anniversary compilation record.

Essentially a tribute to pioneering Jamaican musicians, Creation Rebel draws attention to the influential role that this small Caribbean island had in the emergence of cut-paste and mix culture, which forever changed the music-making process. Highlights include reworks of songs by legends such as Barrington Levy and Augustus Pablo, as well as a refreshing collaboration with turntable wizard Rob Swift.

Whereas Spooky’s previous works mainly showcase his own talent, he uses this remix project to ensure that the Jamaican sound is front and center and given its due credit. Still, it’s hard not to view the inclusion of an a capella version of Bob Marley’s “Mr. Brown” as an open invitation for digital age music makers to do some creating of their own.