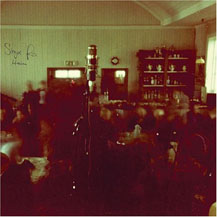 If there was a soundtrack for the inevitable melting of the world’s glaciers, icebergs and the icecaps, it should be done by Iceland’s Sigur Rós. The band’s post-rock experimentalism is atmospheric, elegantly noisy, introspective and fragile, while at the same time otherworldly, eerie and utterly singular.

The second half, Heim, is made up of six acoustic versions of pieces from all four previous Sigur Rós records. The unplugged constraint works well as Sigur Rós’s customary electric drone is replaced by the string quartet Amiina, who give the gauzy material a melancholy, slow-thaw effect.

The uninitiated may find Hvarf/Heim excessive and cumbersome, but enthusiasts will appreciate Hvarf/Heim’s symphonic grandeur and sinuous emotionality.