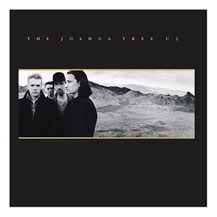 When U2 released The Joshua Tree in 1987, they went from being a very popular band to being the most successful band on the planet, a title they easily retain today. The album has been re-mastered with four different 20th anniversary editions available: on vinyl as a double disc, as a single re-mastered CD, a deluxe edition that contains a second bonus disc of B-sides and demos and, most desirable of all, this three-disc box set.

The original album itself is well worth the price: stellar sound on a non-stop hit parade of “Where the Streets Have no Name,” “I Still Haven’t Found What I’m Looking For,” “With or Without You” and “Bullet the Blue Sky” for starters.

The disc of odds and ends collects material from the same recording sessions as The Joshua Tree; the B-side “Silver and Gold,” the single edit of “Where the Streets Have No Name,” an early version of “Sweetest Thing” and a novelty-like number called “Drunk Chicken/America” that has Bono reading the poetry of Allen Ginsberg over a background track that sounds like it should be the theme to a cheesy television cop show.

The third disc is a DVD packed with goodies, first and foremost of which is a full show shot in Paris in 1987. The film is quaint compared to U2 films of today – no lasers, no banks of multi-media screens, no fireworks – just lots of good music (and Bono and the Edge both still in ponytails).

The package is topped off nicely with a 56-page hardback book crammed with previously unseen photos.