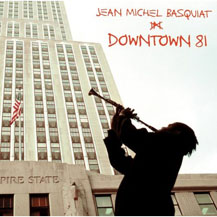 The Downtown 81 soundtrack vividly captures the exuberance and joie de vivre of the early-’80s New York City art and music scene. While the pseudo-documentary Downtown 81 (released in 2000 and recently reissued) focuses on a pre-legendary Jean-Michel Basquiat, this soundtrack is an indisputable treasure, an authoritative archive of New York’s early-’80s multi-genre underground musical environment.

Representing dance/fusion here are Kid Creole and the Coconuts, Coati Mundi and French tango-pop artist Calogero. But Downtown 81’s undeniable importance is chronicling the Big Apple’s No Wave movement, leaving some listeners fascinated by the material, while others will find it too discordant.

Experimental synthesists Tuxedomoon, minimalist funksters Liquid Liquid, avant-garde punksters D.N.A., strident funk-punkers James Chance and the Contortions and several others (Lydia Lunch, Suicide) give no quarter, jabbing out years (and even decades) of dissonance ahead of the norm. As a document of a specific time and place, Downtown 81 is matched only by the Brian Eno-produced compilation No New York.