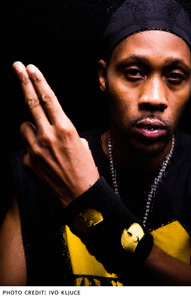 Alongside Denzel Washington and Russell Crowe, the stars of Ridley Scott’s American Gangster, a bevy of rappers, namely RZA, Common and T.I., lend their talent to the blockbuster film. According to RZA, who’s taking his thespian status seriously these days, the movie studio made wise moves picking the previously mentioned rappers.

“I think Universal and the casting people who chose us chose some good people to play the parts and not just a hip-hop artist with a popular name or who’s hot on the block,” he reasons. “They really took their time to get somebody with a spirit about them, in all of us you watch it in the film you see that we not holding our balls. We came to the table and played the part we were supposed to play.”

As a kid who grew up on the other side of the law, the fact that he plays a cop in the film doesn’t lose its irony on RZA. But it’s all for the love of the Hollywood hustle, which seems to perfectly fit this native New Yorker.

“Acting is one of the most spoiled jobs we can get,” the beat wizard shares. “You on the set and you say I need some Lays and some Red Bull and two PAs go and get it and bring it back. It’s really an ego stroke. In my life, I’ve been the head of Wu-Tang Clan. I’m always the one that got to do this and do that and make sure things are right, but when I’m doing these films people got to wait on me and it feels very, very, very pleasurable.”

In addition to co-starring as one of Russell Crowe’s undercover cronies in American Gangster, RZA and the Wu-Tang Clan are set to release their fifth (not including their greatest hits CD) album, The 8 Diagrams. With so many Wu members, each with his own hectic schedule, RZA compares making this album to making a movie.

“It wasn’t an easy process putting that record together,” he says. “It took me a long time. Almost nine months.”

Despite the lengthy, hard process, RZA’s investment has paid off.

For more than a decade RZA has stayed busy behind the boards, whether creating Wu masterpieces or working on film scores. Best known for his work composing for Ghost Dog and Kill Bill, he’s collaborating on a new flick, Babylon A.D. starring Vin Diesel.

“I’m doing a film with one of the best guys in the world, Hans Zimmer,” he tells. “We got Hans Zimmer and his whole team of classical composers and you got RZA and his whole crew of homeboys from the hood, and we all be in the studio, just vibing back and forth, passing fouls and making this movie something different.”

“I realize in Hollywood right now there’s this big thing going on with fusion between young hip-hop composers and classical trained composers, and I think that adds a new sound to the movies because people who’re going to the movies now are actually more conscious of the music and paying attention to what’s going on,” he explains. “I think from being a person who has a name value as well as a person that understands these two worlds, I’m able to solicit more work.”