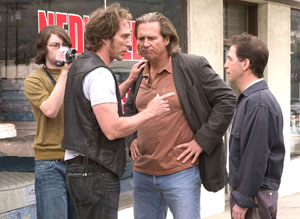 Sargentee agrees to let a local Foto-Hut employee, affectionately nicknamed Some Idiot (Joe Pantoliano), write and direct the movie-within-the-movie for the discount on developing. The eponymous amateurs bungle their way through the making of the lascivious film.

The movie has several funny moments, and a handful of notable actors stop by for cameos. Brad Garrett’s short but memorable turn as the manager of a sporting goods store is especially pleasing. Blink and you’ll miss Steven Weber, whose talent is wasted in a meager role.

Unfortunately, the movie suffers from a terrible malady that afflicts many movies and TV shows. The Amateurs suffers from a serious bout of voice-over madness.

It’s so grating it ruins an otherwise fine film. Ironically, his character, Sargentee, even mentions the screenplay rule “Show, don’t tell” in his narration.

Screenwriter/director Michael Traeger violates every rule his characters espouse. The Amateurs could have been a cute little comedy, but it comes off as amateurish.