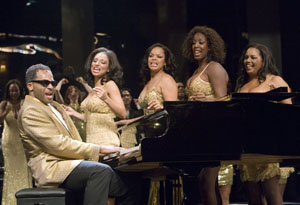 I had no way of knowing that this would be anything more than a pleasant, average evening of theater. The opening number was vibrant and full of energy, but what show wouldn’t start off with a strong number?

Things were going along nicely when Yvette Cason, as Ray’s mother Retha, poured every emotion into her rendition of “Drown in My Own Tears.” The house fell silent, and everyone knew we were in for something special.

“Ray Charles Live!” is set under the premise that the late Mr. Charles is in the studio to record a live album of songs and stories that recount his life. Director Sheldon Epps weaves a cohesive tale by dipping into Charles’ extensive catalogue of music and finding the perfect blend of songs to show the good times as well as the bad.

Brandon Victor Dixon does a fine job of portraying the lead role, but is overshadowed in scenes that also contain the younger Charles, brilliantly played by Wilkie Ferguson.

However, the standout performance of the night was by Angela Teek as Mary Ann Fisher, Ray’s paramour and back-up singer. Teek’s vocals are phenomenal in song, and her comic timing is impeccable in dialogue.

The entire ensemble of this production works together like a well-oiled machine. Musically, there was not one sour note. In dance, there was not one wrong step. The energy never faltered as the majority of the audience tapped their toes and bobbed their heads along with the show until they jumped to their feet and offered the cast a standing ovation at the close.

Musical
Summer: The Donna Summer Musical Comes to the Hollywood Pantages from Nov. 5 thru 24!
2,609 views