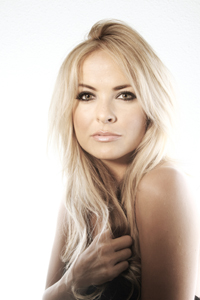 Think back to the first summer you ever spent away from home. For me, the thought evokes memories of slumber parties in log cabins.

Now imagine that first summer away from home was on a bloodthirsty, cult-like commune in the middle of nowhere, and your estranged father was offering you up to the gods as a sacrifice. Chauntal Lewis has been living the dream – er, nightmare – on the set of her new movie, The Commune, for the past two months.

In the film, Lewis notes, her character “kinda [goes] crazy.”

But who wouldn’t? Lewis portrays a girl whose parents divorced when she was very young, and who has just reunited with her estranged father for the summer.

Their reunion is bittersweet and odd; she discovers he is an active leader of his commune. Communes then were “kind of cult-like,” Lewis informs me.

The most horrifying part is that it’s based on a true story of a girl at an actual commune, acting as a real-life sacrificial lamb. Yet this psycho-thriller offers more than one would assume, given its bone-chilling premise; the film also includes a romantic storyline.

“I have a wonderful love scene,” Lewis tells, infusing light into an otherwise bleak-sounding filmic landscape.

Though the world of entertainment is nothing new for her, The Commune represents her first leading film role. Prior to this movie, her big-scale debut was on the Internet in a spoof for YouTube called “Lindsay Fully Loaded.”

“I’m told constantly that I look like her,” Lewis says.

The video is a spoof of the adventures of Lindsay Lohan, her DUIs and diva-like behavior. It’s very clever and pokes fun not only at Lindsay, but also her cohorts Britney, Paris and Nicole.

As we spoke, Lewis was on her way to start filming another YouTube spoof; this time she’s playing Britney Spears. However, Lewis maintains that the video is not making fun of Britney, but rather paying homage to the “Britney that we miss.” Similarly, she claims she “loves Lindsay” and thinks she’s a very talented actress, but hopes she gets help.

Lewis diagnoses the problem with these young Hollywood starlets as one of fundamental instability.

“They don’t really have a solid foundation as far as their family goes,” she points out. “For me, I just stay away [from bars and clubs].”

But staying away from cameras must be difficult, given the public demand for any and all information about celebrities. When I ask Lewis if she thinks young Hollywood actresses read celebrity blogs, she replies: “I think so... I do. I think they need to avoid them. A lot of [blogs] are just exaggerating the truth – but I totally [read them]. Maybe it’s our generation.”

She says that she admires Reese Witherspoon, and confesses that it’s hard to find trustworthy people in Hollywood.

However, if her professional career is any indication, Lewis seems to be succeeding at striking a balance among all the things she wants to do. In addition to her new movie and her YouTube spoofs, she’s currently working on her debut album, which is “urban-type pop, like Britney, with elements of Avril” and looking for independent projects she can sink her teeth into.

“Acting and performing are my passion, so I just stay focused,” she says. “If there’s no work, I’ll make work.”

However, she wants to immerse herself in all aspects of the creative process. “There are lots of short films that I’m writing and I want to produce. This is the only thing that I know I love to do, and I’m not stopping.”