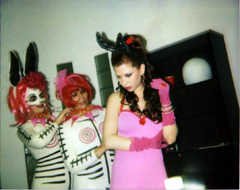 The Rabbit was in full effect Saturday night, celebrating the release of their third full-length album RadioAngel & the RobotBeat. The foursome, led by sexy lead singer Jesika von Rabbit, performed what fans would consider a typical Gram Rabbit show. But for those who are a little less familiar, it may have looked like madness and mayhem.

Von Rabbit donned her trademark bunny ears, skimpy clothes and large space-like stripper heels while she played her keyboard and sang echoed lyrics that were at times political, but mostly like clues to a crossword puzzle. Accompanying the band onstage was a mystery woman wearing a white mask, dressed in a black leotard and cape.

Later, the woman in black was replaced by two dancing female white rabbits. The only thing that could compare with the strangeness happening onstage was the circle of diehard fans dancing in front of the stage – each donning their own pair of rabbit ears. Those fortunate (or maybe unfortunate) enough to have listened to, or even seen, Gram Rabbit in their early days should be pleasantly surprised with the band’s progression. They are still very strange and completely unconventional, but their music has grown tremendously.