Will Smith: The World’s Last, Great Hope in I Am Legend 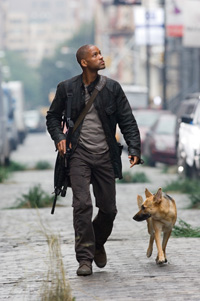 In this latest version of the post-apocalyptic “last man on Earth” concept Will Smith flexes his acting muscle like never before. Though he has already proven his ability in the past, he shows us once and for all he can carry a film not only on his celebrity, but also on talent.

Based on the 1954 novel by Richard Matheson, Smith stars as Dr. Robert Neville, an eminent scientist and the world’s last, great hope for survival. An incurable, manmade virus has swept the planet and wreaked havoc among its many populations.

Dr. Neville, for some miraculous reason, is among a minute percentage of the population that is immune to the virus. He stays in New York City and continues his research to reverse the effects of the virus for years after the island is cut off from the rest of the world. He is the only non-infected human there, alone but for the company of his dog.

He religiously documents all of his research efforts and broadcasts a daily radio message with hope of a slim chance of finding other non-infected survivors. He rules his world by day and by night hides from the infected population that lurk in the darkness. They have become mutant, zombie-like creatures that cannot expose themselves to the ultraviolet rays in sunlight, but it does not stop them from engaging the doctor in an intense game of cat-and-mouse on their own terms.

This is not the first film adaptation of this novel; it’s actually the third. The Last Man on Earth with Vincent Price (1964) and The Omega Man (1971) with Charlton Heston preceded this incarnation. With all due respect to the previous filmmakers, however, this is by far the superior version.

When asked about key differences, writer/producer Akiva Goldsman says, “It was an attempt to, I think, finally give some destiny to the character.”

Goldsman continues by tipping his hat to Stephen King for what he explains is one of his notions: “When the world thins out, when there’s less noise, purpose or role or fate rise to the fore. That’s a really great post-Armageddon idea. I find it wildly fascinating.”

Smith’s ideas about the differences are expressed by pointing out the similarities.

“It is such a primal concept, the idea of being alone and the fear of the dark,” he says. “Every four year old has thought about that idea.”

He continues the thought by comparing the technology available at the different times the films were made.

“There has never been this level of technology to support the idea, where you actually can shut down six blocks of Manhattan, and if a car goes by in the background you can just do the scene and remove it later so you actually can see empty New York.

“You can see fighter jets take out a bridge. That level of technology has never been around to support the weight of the story. I felt like it would be a great opportunity to see visuals and experience emotion that in the past [you] haven’t been able to.”

The special effects used in this film help to heighten the reality of the desolate images it tries to convey, but it didn’t rely completely on high-tech wizardry. Many of the scenes were shot in great detail and at great expense on location on the streets of New York. As stated previously, the production actually closed parts of the city. Fifth Avenue was detoured for days and days – for blocks and blocks!

When asked about his decision to do so, director Francis Lawrence explains, “It just informs the actors in a different way when you are out in the elements, in the weather and on the street, and you walk out into the middle of the street and there should be cars, but there aren’t. It adds an air of naturalism that we were looking for.”

It also adds a powerful image to the tableau. The location of the story in the book is Los Angeles. In the film it’s moved to New York because it’s the icon of the bustling, big city image. To see footage of the famous thoroughfare devoid of any signs of life is remarkable.

Smith turns in a great performance as a driven individual with a brilliant mind whose solitude and isolation causes him to flirt with the border between sane and insane. When approached with the idea, he was a little leery.

“That was the terrifying part of even taking on this film,” Smith says. “The idea [that] there’s probably 80 pages of just me and a dog. I’ve had good times on camera before and people have enjoyed me in a movie theater but that might be a little too much Will for anybody,” he says with a laugh.

With so much of the film dependent on the actions of an animal actor, it must be noted that “the dog,” Abby, turns in a very good performance herself. It’s especially noteworthy because she was a rescue dog with only a couple of month’s training at the start of the filming schedule.

Working with Abby was “mind-blowingly easy” according to Lawrence.

“We would put her in, and I would shoot her like a character and she would do what we wanted her to do and the reactions were natural,” he says. “It was great!”

Author Richard Matheson himself has stated that he found Smith to be the perfect candidate to portray Dr. Neville. The acknowledgment helped Smith mentally prepare for the tough job of portraying such an intriguing character. “It was important to me that Mr. Matheson felt that I could do it and he was on board for how we were planning on doing it,” Smith assures.

“When you do something that is someone’s baby, essentially, it’s so important that that person or people feel that you’ve done [it] justice,” Smith adds.

I Am Legend is an intense film. It’s not the usual happy, warm movie package one associates with a winter release date.

According to Smith, he and Goldsman posed questions to one another: “Why do the big movies come out in the summer and the good movies come out in the fall? Why are they separated? Is there any possibility that you could take both and marry those ideas; to make a big movie that has a big concept yet put a person at the center of it and really follow a character through whatever the reality of that situation is?”

The pace of this film keeps you on the edge of your seat until you almost jump out of it. The content of the film makes you think about basic principles of good vs. evil, instinct vs. intellect, even God vs. science.

Alice Braga offers a well-done performance in the supporting role of Anna.

“Many people were surprised that I was doing an action-zombie movie with Will Smith,” she relays, laughing.

I Am Legend releases in theaters Dec. 14.