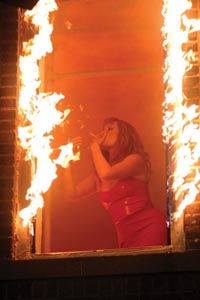 Touted as a down-and-dirty musical love story, Romance & Cigarettes tells the story of Nick (James Gandolfini) who is married to Kitty (Susan Sarandon) while carrying on an affair with the wild Tula (an underused Kate Winslet). The movie drips with style, and the random bursts of song fill the film with energy and personality.

Although the actors all put in solid performances, the smaller subplots of Kitty’s daughters are a bit undeveloped and unnecessary. John Turturro, the director, also focuses more on style instead of development in the first half of the movie.

But, the second half slows things down a little and fleshes out the humanity and depth of these characters. Even though the movie becomes slower and more deliberate, this development more than makes up for a weaker first half in a movie that will surely please the senses.