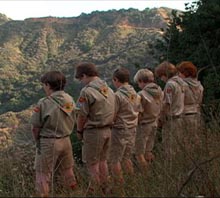 The American Film Institute is providing female aspiring directors with the perfect opportunity to meet their desired career goals. AFI’s Directing Workshop for Women will choose eight finalists nationwide to participate in its prestigious, tuition-free program.

The workshop will give women assistance to produce a film short. Over three weeks, the chosen eight will develop a short based on their submitted screenplay with the assistance of the Jessica Kaplan Screenwriting Series.

AFI will provide installments of $5,000 to assist with the production of each short, but it’s the participant’s duty to fundraise and organize her own crew. The time allowed for pre-production is only five weeks, starting from the end of the classes to the beginning of production.

Since 1974, there have been over 200 workshop participants, and major opportunities can arise from the experience. HBO purchased former participant Deb Hagan’s short Pee Shy, which has won over 20 awards.

Applications can be downloaded at www.AFI.com/education/dww.