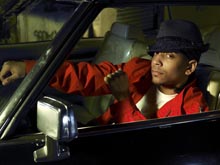 The 23-year-old Atlanta dweller knows how to make you feel comfortable. It’s not surprising since his No. 1 hit “Bed” is about tucking you in at night.

J. Holiday wants to put you to bed. And at least 105,000 people would like that very much.

“So far my greatest moment was selling 105,000 copies of my album my first week,” boasts Holiday.

“A lot of people doubted me and expected me not to, and as a new artist it feels good to prove people wrong.”

Influenced by a handful of musical greats from Marvin Gaye and Donny Hathaway to Jodeci, D’Angelo, Tupac and the Fugees, it seemed like Holiday almost came out of nowhere. Actually, he’s been singing seriously since he was 14 and honed his performance skills in a trio, 295, named for the thoroughfare between Washington, D.C. and Baltimore, Md.

“The only thing I like better about being solo is I only have to deal with my personality,” Holidays explains.

“When you have a lot of personalities to deal with, it becomes hard sometimes. We did a lot of shows. I took a lot of experiences with me. It helped me get my work ethic up.”

Though “Bed,” the first single from his No. 1 debut, Back of My Lac,’ is an undeniable hit, Holiday believes everything he records is a hit.

The irresistible “Bed” has scored Holiday a spot on R. Kelly’s upcoming tour.

With a handful of young, handsome and sexy stars on the R&B scene, Holiday offers something different. Omarion, Trey Songz, Marques Houston, Chris Brown, Ne-Yo – these are pretty boys with pretty voices.

J. Holiday seems a lil’ rough around the edges. He sings pretty but doesn’t look as polished.

Pretty ironic that a man named Holiday would be busier than ever since the release of “Bed.”

“Holiday, I got that [name] from people in the industry. They said with me around it’s like they’re almost not working. ’Cause I love to work but as far as my voice, they say a lot of people love my voice, and they never have to explain my records to anybody so they started calling me Holiday.”

But this is one performer who won’t see a vacation any time soon, and he wouldn’t want it any other way.

“I’m serious about what it is I do,” he emphasizes. “I take a lot of pride in my music. Supporting me would definitely not be a lost cause.”

Back of My Lac’ is currently available. J. Holiday will perform Dec. 14 at the Forum. For more information, visit www.jholiday.com.