Kenna: Make Sure They See My Face 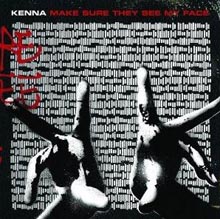 With innovation and stellar production, Kenna’s Make Sure They See My Face is nearing the boundary of creating something new and constructing an imaginative sound in an age of music that’s often redundant.

Chad Hugo of the Neptunes brings buddy Pharrell Williams on board to help former classmate Kenna create an album that is a fresh mix of British ’80s new wave pop with elements of such musical originality that it may be ahead of the curve for acceptance by the masses. However, Kenna walks the line between completely fearless experimental sounds and safe mainstream.

It begs to wonder if the production team may have pushed him too far to the left and reigned in his experimental side too much. The Neptunes obviously acknowledge Kenna’s talent, and it feels on this album that they’re attempting to bring his style to a wider audience, yet they don’t quite make the tunes friendly enough for radio or MTV play.

That said, this is the kind of music that should become mainstream. The album has a cluster of tracks that are worthy of a “sounds like” title, but as a whole, the collection reflects everyone from U2 and Radiohead to Justin Timberlake and Jamiroquai.

Make Sure They See My Face is on the edge of something great. While not quite reaching the pinnacle, the album has a fresh, diverse sound and amazing production.

Make Sure They See My Face is currently available.