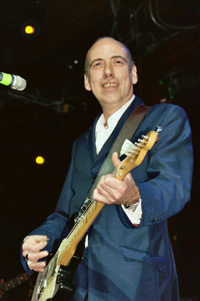 Guitarist Mick Jones and bassist Tony James were once members of punk band London SS; after quickly splitting off into the Clash and Generation X, they’d reunite (both as guitarists) in 2002 to form Carbon/Silicon, releasing numerous free digital albums and – as of October – a CD debut.

On this, their first visit to Los Angeles, drum and bass gaps were filled, and though not punk by any means, their sound was much harder and more believable as the work of former punks than their recent recordings have been. James and Jones have also aged gracefully, and are now on either side of 50.

On one hand, you’ve got Jones – crooked English grin, a slight hunch that tops a surprisingly frail build, white chest hair peeking from his collared shirt. On the other, you’ve got a much sturdier James, whose every hair has whitened, whose smile is nearly identical to that of a post-dental-work David Bowie.

Jones shakes his hips like an aged dandy, and James puckers his lips while holding his guitar over a bent knee. Together, they ham up for every camera and smile like they’ve discovered the greatest secret in the world.

The best part of Carbon/Silicon’s performance, though, wasn’t their snazzy suits or cheery smiles, nor the awkward way that Jones muttered profanities while fussing with his cuff links. And though charming, this highlight wasn’t Jones’ unintelligible storytelling.

Carbon/Silicon’s a winning act because they revel in the present, and after an audience member shouted out to “remember Joe Strummer,” Jones showed no bitterness over the inappropriate mention of his late band mate and politely waited for the noise to settle. Then he went on singing in a voice that’s gone unchanged for 30 years.