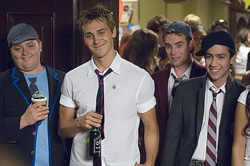 Nic Nac was laid out on his couch, waiting for buddy Jason to come over and play some video games. Jason just had oral surgery earlier in the day. Nic Nac, the good friend that he is, wanted to take Jason’s mind off the surgery with some fun games. And so the night went.

Okay, so he didn’t pull off any Beta House pranks on his buddy – for one day, he did not improvise any stunts on his bed-ridden homeboy. That would wait for another day – perhaps when he’s on the set of another American Pie segment.

In the meantime, you can get your fill of Nic Nac on the current American Pie installment, tited American Pie Presents: Beta House. If you find yourself laughing hard during one of Nic Nac’s scenes, you can thank his sense of improvisation. The young, rising star absolutely loves to make up jokes as he goes along – until the director says enough, that is.

Now, just because Beta House is a straight-to-DVD production does not mean you should not take Nic Nac seriously. Put aside his stand-up routine in “Nick Cannon Presents: Wild ‘N Out.” He may be goofy and improvisational on camera, the only white boy doing a stand up among black comedians and ultra-laid back in real life, but that does not mean he cannot hang with the best of them.

The Milwaukee-native recently was on set for an animated film that stars Michael Keaton (someone he idolized as Bruce Wayne/Batman), which was a surreal yet amazing experience.

Nic Nac also co-produced a movie. Yes, you read that right – “co-produced.” Earlier this year, he collaborated with Nathan Bexton to produce the comedy 2 Dudes & a Dream, where Nic Nac also starred as Sebastian Dinkle alongside Brian Drolet, who played Thomas Price.

The comedy seemed fitting for Nic Nac, as the plot synopsis seems in tune with his outlook on life. A plot that focused on an actor and a plus size model moving to Los Angeles to chase their Hollywood dream, the comedy’s underlying theme is about pursuing dreams without limitations.

Such can be said about Nic Nac, who seems to have found his calling. He talks of shooting on-set one day, where he did a scene for nearly 24 hours straight. As he recalls, it was one of the greatest moments of his life, when he realized he belongs here, in front of the camera, entertaining fans, making them laugh – all while just being himself. Bringing a smile to you while he lets his inhibitions go – sounds like something we all would like to aspire to.

While you are chasing your aspiration, be sure to check out Nic Nac’s flicks, including American Pie Presents: Beta House.