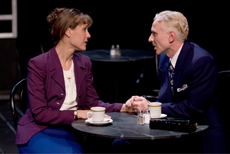 Only mad dogs and Englishmen would be brave enough to tackle Noël Coward’s triumphant one-acts under the banner of “Tonight at Eight-Thirty,” but the Antaeus Company is known for its bright bold moves. Proving that they have had too many martinis and “stengahs,” Antaeus rotates two large casts between eight one-act plays.

“Tonight at Eight-Thirty” is presented in two parts, each comprised of four one-acts: “If Love Were All” (features “Star Chamber,” “We Were Dancing,” “Astonished Heart” and “Hands Across The Sea”) and “Come the Wild” (features “Red Peppers,” “Fumed Oak,” “Family Album” and “Still Life”). It is a titanic task worthy of the mythical man-mountain of the eponymous ensemble. The result is a joyous theatrical experience.

In Part One, Michael Murray’s frenetic direction of “Hands Across the Sea” is a dizzying array of mistaken identity of Shakespearean proportion. Piggie (Nike Doukas) has invited guests to her London home, but the guests she’s expecting aren’t the guests who arrive. It’s a brilliant madcap farce superbly played by the horde of actors on stage.

In Part Two, JD Callum and Gigi Bermingham channel Coward and Gertrude Lawrence in a splendid rendition of George and Lily in the “Red Peppers.” The gifted actors portray a painfully unfunny Vaudeville act unaware of their own ineptitude.

Both nights are spectacular. One word of warning to the deaf and hearing impaired audience members: the Antaeus Company is only renting the space at the Deaf West Theatre. There are no ASL interpreters present for the performance.