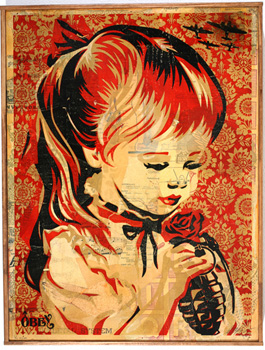 Most know Shepard Fairey by his stickers and not his name: the massive Andre the Giant Head plastered on billboards or stickers on light posts with the words OBEY under the late wrestler’s image. Other recent wheatpaste offerings include Bush cradling a bomb wondering, “Or was it hug babies and drop bombs?” and a series of AK-47’s raised in the air with flowers blooming from their barrels.

Being first confronted with Andre or OBEY is quite a disquieting experience: obey what?

“The thing that people protest having to do, but do the most, is obey,” Shepard says of his street art. “I think they’re uneasy with the idea of being enslaved, to put it harshly. I use ‘OBEY’ in bold as a surefire way to get people to confront they’re being obedient, if they really want to, and if they do, that they have to deal with it.”

Merry Karnowsky, who’s about to celebrate her gallery’s 10-year anniversary, was one of the first people to showcase pop surrealism and lowbrow art in the U.S.; that the line for the show’s opening stretched down La Brea is a testament to her tastes and the changing palate of the artistic public.

With Imperfect Union, those who have wondered just why Andre’s head is on the side of their apartment building will see an additional 131 artworks that weave a narrative, mollifying the anxiety about being confronted with this artistic tagging by visually explaining Fairey’s message. Be sure to keep Xanax in the car – with titles like War By Numbers and Operation Oil Freedom, your conscience will be, as Shepard calls his tagging, “bombed.”