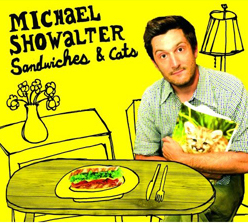 As a fan of comedy groups such as the Comedians of Comedy, the Lonely Island, Simon Pegg and company, etc., one of my favorite all-time troupes is that of the mid-’90s MTV hit sketch comedy show “The State.” Two of the founding and best-known members of this group are Michael Showalter and Michael Ian Black who met at NYU in 1988 when the improv group was formed. Since then they’ve been co-creators, stars and writers on “The State,” Comedy Central’s “Stella” and the movies Wet Hot American Summer, The Baxter and The Ten.

They’ve long been successful collaborators and friends perhaps because they each stay true to their own particular style of comedy. Those two styles just happen to mesh extraordinarily well together.

Recently, Showalter and Black have broken out on their own and released solo debut comedy albums. Though they’re individual efforts, the two are not entirely separate.

Showalter introduces Black’s album, and they toured together in support of their releases. However, with these albums it becomes more apparent how different their styles really are.

Showalter’s album, Sandwiches & Cats, has a very artistic feel, almost like a spoken word CD that happens to be funny. A few of the tracks are songs by the Doilies – comprised of Showalter and fellow actor and friend Zac Orth. Orth plays the acoustic guitar while Showalter spills his pessimistic, sarcastic musings as though at an open mic poetry reading.

Friends of Showalter, Janeane Garofalo and Eugene Mirman, make appearances on the album. Their presence is understated but hilarious, especially when Mirman begins to laugh during his fake advertisement for a sexy apple orchard.

There’s very little straight stand up on Sandwiches & Cats. The few joke tracks on the album are a little bit whiney and downtrodden but entertaining nonetheless.

The highlight of the album is towards the end when he opts to read stories that he wrote as a young teen. It’s immediately obvious that writing has always been Showalter’s true talent.

Black, on the other hand, tends to stick more to a traditional, straightforward stand-up routine on his CD, I Am a Wonderful Man. There are no clever songs, fancy gimmicks or guest appearances on this album. It’s just Black, a microphone and an audience.

There’s a more positive vibe to Black’s comedy. Though he addresses mostly the negative, annoying aspects of life – as most comics do – he does so with a surprisingly upbeat tone. As he states, when commenting on terrorism, he likes to find the silver lining in things.

Black’s routine inspires some laughs but for the most part it seems like well-worn territory. Not that the jokes are completely unoriginal, there’s just nothing terribly spectacular about any of it, except for the naked-on-a-bear-skin-rug photo of Black on the inside cover of the album.

It seems that being a successful comedian these days requires an extremely high intelligence quotient, and these two guys are no exception. Both Showalter and Black are intelligent men discussing very unsophisticated topics. Disregarding the abundance of dick jokes, it’s obvious that both of them are well educated and that makes their comedy that much more entertaining.

Both Sandwiches & Cats and I Am a Wonderful Man are worth the trip to your local record store. If nothing else, you’ll own a picture of Black lying naked on a bearskin rug with champagne, and that’s worth the $13.99 alone.