New Year's Eve Event Guide: A Bevy of Options for Ringin’ in ’08 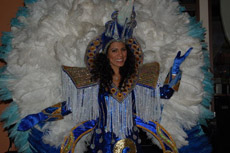 Party aboard the historic Queen Mary with entertainment provided by band Made in Bahia, DJ Manu Gil and various dancers. Music, dancing and a midnight fireworks show round out a crazy night. A portion of the event’s proceeds will go towards “Eyes of a Child,” a non-profit organization dedicated to helping needy children in Brazil.

(Call the night of event for directions)

This party will feature indoor and outdoor areas with three full bars, valet service and plenty of food. Grab a drink and a bite and hang out in one of the lounge areas while scoping out some of the special guests, including MF DOOM, Haiku d’etat, Casual, Gaslamp Killer and Parallel. This will be the only hip-hop and jungle event for New Year’s!

There are four rooms of music and a dinner buffet, but the real catch lies in the live aerial performances, the laser and lighting show with a one-of-a-kind LED wall and Hollywood’s biggest covered outdoor patio. Prepare yourself for something Epic.

The normally classy-looking venue will be transformed into a tropical island oasis with top local DJs spinning out a sweet dance beat. Not feeling the dance? Then lounge around on the outdoor patios with a cocktail in hand.

You can also start the New Year with free stuff! Come for the door prizes (such as vacation trips, printers and DVDs) and party favors, stay for the champagne toast and the live ball drop.

Cruise into the New Year with a yacht party! Hop aboard Endless Dreams, Long Beach’s most elegant oversized luxury yacht. Spanning 140 feet with three levels, outdoor decks, a lounge and a large dance floor, this is going to be a party of titanic proportions.

Each ticket includes a champagne greeting, an open bar all night and unlimited appetizer buffet court. Get your tickets early and party late into the night!

‘THE FUTURE IS NOW’

Celebrate the future at the Avalon, with HD video screens and stage designs immersing partygoers in an unforgettably ethereal experience. This will be the only true after-hours venue in Los Angeles, going from 10 p.m. on New Year’s Eve till 10 a.m. on New Year’s Day.

The full bar will reopen at 6 a.m. for those who want to start their year right (or wrong). The party is meant to embody Avalon’s commitment to going green, so you can party without guilt and without waste.

Sure, you’ve attended big parties in your time. But this party takes the cake when it comes to big parties. There is expected to be over 10,000 people in attendance, so get ready to ride one massive party wave into the New Year.

Three massive climate-controlled big tops will take over a 7-acre lot in downtown Los Angeles. Each of the three arenas will feature custom stages with sets by Tiesto, Roger Sanchez, MSTRKRFT, Z-Trip and more.

Party in style and party in bulk! This party takes up an entire block as the street is transformed into eight different areas with 12 bars, four styles of music and over 50,000 square feet of partying space. Go-go dancers, Cirque du Soleil performers, fireworks and a midnight champagne toast round out the party.

Enjoy yourself at the place that has been dubbed the Hottest Hollywood Hotspot by InStyle magazine. Known for its many celebrity sightings – Justin Timberlake, Jessica Alba, Dr. Dre, Lindsay Lohan and more – this is your chance to drink with celebrities and feel like one, too. Also of note: a great DJ performance mixing house, electric, hip-hop and old school.

Rock your way into the New Year with ’80s cover band Metal Skool at the KeyClub. Now you can travel back to the ’80s before going forward to ’08!

There’ll be a complimentary champagne toast so you can shred that countdown with some class. There’ll also be dancers, a midnight balloon drop and a celebrity host.

Ten-piece funk orchestra Breakestra and DJ Jeremy Sole’s Musaics will be laying down some grooves at Zanzibar. With a full bar and party favors, there’ll be no end to the fun. While no end to fun sounds good, it gets better: free-flowing champagne after midnight so you can start the New Year right.

A great place to party with Hollywood A-listers and socialites. Enjoy a premium open bar all night long, as well as performances by Mickey Avalon and guest drummer Travis Barker. Mingle with the cream of the crop at one of the trendiest places in Los Angeles.

KIIS 102.7 hosts a Cirque du Soleil-themed New Year’s event with three areas of music and great radio/club DJs. You can opt for the full dinner to go with the circus performers, the confetti blast and the other surprises that await you. End 2007 with a KIIS!

Come usher in the New Year with the 20th annual ball at the Renaissance Hollywood Hotel and Grand Ballroom. Start off the night with a gourmet dinner buffet catered by Wolfgang Puck.

After the mouth-watering meal, you can make your way to any of the multiple stages and dance floors for some great entertainment, including performances from Jeff Goldblum and the Mildred Snitzer Orchestra Jazz & Blues Ensemble, DJ Peter G, Simon the Magician and various aerobatic and burlesque acts.

Top off the night with a spectacular countdown show, and if you still want to party (and have the money lying around), you can reserve a room for the night at the beautiful and luxurious hotel.

Fireworks will be shot from the jetty starting at 11:55 p.m., lighting up the night with a firework per second as the show counts down to midnight. End your year (and start your new one) with a bang. The firework show is free, but various charter boats and restaurants will offer special viewing dinners.

Hosted by Victoria’s Secret Angel Marisa Miller, the Highlands will be transformed into a snow-filled winter wonderland. There are three clubs in one until 3 a.m. so that you can get your fill of dancing. A countdown video will take place on huge LCD screens around the club along with a champagne toast at midnight. Entertainment includes super DJ Chris Armenta spinning music to a lingerie fashion show, Gina Star, the Prophecy and Nik Nasty.

Come party with Nick Cannon, host of the MTV show “Wild ’N Out” and star of the movies Drumline and Roll Bounce. Enjoy multiple levels with southern cuisine and an in-house DJ with a front patio view of City Walk.

What’s New Year’s without a historic Los Angeles tradition? The parade has been staged every year since 1890, and since then has become a national event rivaling the ball drop in Times Square. The theme for this year’s parade is “It’s Magical” and features floats made entirely from seeds, petals, roots and other natural materials.

People tend to camp out on New Year’s Eve to witness the parade, so get there early or reserve a spot in the grandstand by calling the Sharp Seating Company at (626) 795-4171. The parade, traversing a five-and-a-half mile route, is a spectacle to behold.

Get ready for a New Year’s Eve extravaganza featuring Sasha and John Digweed, Junior Sanchez, Ferry Corsten, DJ Reza and more! Held at the L.A. Sports Arena, this party will wow you with a midnight fireworks countdown, indoor pyrotechnics and, of course, a full bar. Best of all, everyone can join the party! (Though you still have to be over 21 to drink).
Article posted on 12/18/2007
This article has been viewed 1636 times.