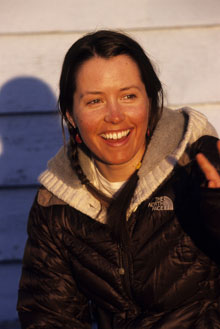 One of the most powerful and terrifying moments in Steep, the documentary about big mountain skiing, is when Andrew McLean and pals are caught in an avalanche. As the snow and skiers slide, the viewer sits wondering the fate of these seemingly fearless athletes.

“[Camera man] John Armstrong and crew went up a mountain one way, and we were climbing up directly beneath,” McLean explains of the capturing of his life-threatening adventure. “They were about 500 feet away on top of a peak looking down.”

Director Mark Obenhaus chimes in: “John had the presence of mind and cool composure to continue shooting when this accident is happening in front of him, but the reality of it is that there’s nothing in the world that he could have done. So keep shooting. This is what we do.”

Steep documents some of the most awesome skiing by the most amazing skiers in the most dangerous locales.It would seem that these big mountain skiers have no fear. To the contrary, fear is what keeps them alive.

“It’s funny people always say, you must have no fear,” says skier Ingrid Backstrom, the only female featured in Steep. “But really you do have fear and that’s what keeps you safe. Because it is dangerous, but with risk comes reward. When you step up to the challenge and access the risk and then manage it in the best possible way, when you come out the bottom it’s a good feeling.”

After losing friends and experiencing near-death accidents, can anything stop these skiers?

“I can’t really think of anything,” assures McLean.

It’s almost as if life isn’t worth living without skiing.

“It’s part of who we are,” Backstrom points out.

“It seems to make sense at the time,” McLean adds.