Winter Film Preview: Fill up your season with these hot flicks 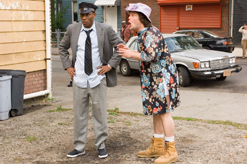 Alcoholic. Womanizer. Texas congressman. Charlie Wilson (Tom Hanks) was the man behind the war between Afghan freedom fighters and Soviet forces, setting the stage for many of our present Mid-East conflicts.

Walk Hard: The Dewey Cox Story follows Cox (John C. Reilly) from his troubled childhood to his rise into superstardom as a legendary singer. Judd Apatow (Knocked Up, Superbad) produces/co-writes.

Forget a will. In the latest ‘Hilary Swank is more than just an Oscar actress’ engine, Swank plays a young widow whose husband leaves her a posthumous list of tasks to do to get her life up and moving again. Kathy Bates, Lisa Kudrow, Gina Gershon and Harry Connick Jr. co-star.

Based on the hit Broadway musical, Tim Burton directs Johnny Depp as a man who exacts revenge for being unjustly imprisoned by a lecherous judge. Alan Rickman, Sacha Baron Cohen and Helena Bonham Carter co-star.

The film is inspired by the true story of a professor (Denzel Washington), who shapes an underdog group of black college students in the Deep South into an elite debate team.

Rob Reiner directs this feel-good holiday movie about two dying men (Jack Nicholson and Morgan Freeman) who break out of their cancer ward to fulfill their dying wish list before they, that’s right, kick the bucket.

Denzel Washington’s first time directing since his directorial debut with Antwone Fisher five years ago, the film is inspired by the true story of a professor (Washington) who shapes an underdog group of black college students in the Deep South into an elite debate team. Forest Whitaker co-stars.

Iranian-French Marjane Satrapi’s graphic novel series Persepolis gained fans the world over with its relatable protagonist: an outspoken young Irania girl who comes of age during the Islamic Revolution, outsmarting the newly established “social guardians,” discovering ABBA and punk, surviving the devastating Iran-Iraq War and, ultimately, living a life of friction between the land of her past and the Europe of her future.

The series has now been made into a highly anticipated film, featuring the voices of Catherine Deneuve, Iggy Pop, Sean Penn and Gena Rowlands. Co-directed by Satrapi herself, the film won the highly coveted Jury Prize at Cannes. A must-see.

THERE WILL BE BLOOD

A beautifully-filmed production about a woman who purchases the orphanage she lived in as a child and moves in with her husband Carlos and son Simon. Their dream of restoring the seaside establishment as a home for mentally challenged children quickly falls by the wayside as her son's new imaginary friend assumes an agressive role in all of their lives.

When her friends start receiving recorded messages of their final moments, and dying just as foreshadowed, Beth (Shannyn Sossamon) jumps to action with the help of a detective (Ed Burns). Then her phone starts ringing...

While it probably won’t accomplish its Friday aspirations and it’s doubtful there will be a Second Sunday, this story of two petty criminals (Ice Cube and Tracy Morgan) robbing their local church might be worth a lazy afternoon just for the laughs Morgan and comedian Katt Williams are sure to provide.

IN THE NAME OF THE KING

Rise and fight! Set in a medieval world, a family man (Jason Statham) is forced to battle when his village is destroyed and wife captured. Also starring Leelee Sobieski.

True heartbreak! Jane (Katherine Heigl) is always a bridesmaid, never a bride, and now she must stand by her sister on the day her sibling marries the man she secretly pines for.

This is an against-the-odds female-bonding movie that pairs Diane Keaton and Queen Latifah with a clueless Katie Holmes for the trickiest bank heist in crime history. A funny Set It Off? Ted Danson co-stars.

Few films can boast feverish fan discussions before they are even released; the buzz surrounding Cloverfield began well before its trailer debuted last July. The trailer barely gave a hint as to what the film would be about, other than the scenes of mass destruction of New York City at the hands of some unknown, gigantic monster.

Said monster and the film's producer, J.J. Abrams, ("Lost," "Alias,"), seem to be the top reasons to see the movie.

THE AIR I BREATHE

Writer/director/god of all things visual, Michel Gondry’s (Eternal Sunshine of the Spotless Mind, Dave Chappelle’s Block Party) latest chronicles two friends (Jack Black and Mos Def) that recreate every movie in a video rental store after one of them (Black) becomes magnetized at the neighborhood power plant and accidentally erases all of the tapes.

Sylvester Stallone writes, directs, and stars as Rambo, filmed on location in Thailand. Now an American river guide, Rambo leaves his solitary life to save missionaries captured by the Burmese army.

Hysterical writing, by the mind behind Tommy Boy and Black Sheep, is combined with the funniest group of guys (Steve Zahn, Jeff Garlin, Jonah Hill) and an animal wildlife show premise in our pick for sleeper comedy of the New Year.

The best part about this foreign-focused flick is Dina (Ronit Elkabetz), the owner of a small cafe in a wee town in the middle of nowhere in the Israeli desert. Her power play at the end is jarring yet predictable.

Thirty days, 30 nights, 30 shows. Vince Vaughn, Jon Favreau, The Axis of Evil Comedy Tour’s Ahmed Ahmed and some of the country’s best comedians take us along for their “Hollywood to the Heartland” tour.