Leelee Sobieski: From Nerd to Lover to Warrior – Growing Up in Hollywood 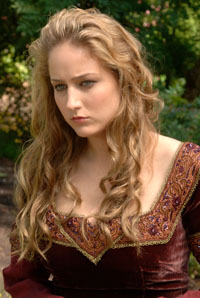 Being in the right place at the right time can open a door full of tremendous opportunities. Just ask 24-year-old Golden Globe and Emmy-nominated actress Leelee Sobieski, whose life began to head in a new direction when she was only in grade school.

“There was a casting director in my school’s cafeteria in New York when I was in the third grade,” she says. “She sent a letter home to three different girls and asked us to go meet with her.”

Sobieski responded to the letter and jumped at the chance to showcase her beginner’s acting skills in front of the casting director. Since this was something new and different for Sobieski, she admits that she was terrible at it.

“I never acted in my life. I never thought about acting. I didn’t know anything about it,” she says, reflecting back to the moment in time that changed her life.

“But I thought [acting] was kind of interesting,” she continues. Though the thought of acting didn’t cross her mind before being discovered in her elementary school’s mess hall, Sobieski decided to pursue the art form.

And from that point on the little girl who knew nothing about acting created a prosperous career. With the support of her parents, acting morphed from an experiment to something she would grow to love.

“Sometimes when you’re not good at something, you get kind of excited by it and you want to get better at it or you want to learn more about it,” says Sobieski as she describes her first feelings about her acting aspirations.

Born Liliane Rudabet Gloria Elsveta Sobieski, she was named for her French and Polish heritage from both parental sides of the family. Since the name Liliane was a bit formal for a child, she adopted the nickname Leelee. Her dad was a teacher and her mom was a writer, and they let her explore her creative talents to her fullest extent.

“I have really good parents,” she admits. “They were really free with my brain and I felt comfortable talking to them about anything, so I didn’t really feel like I was doing something naughty.

“If I did something that might have been considered inappropriate I would still be able to talk about it with my mom or with my dad and they wouldn’t judge me. If I did something really stupid they might have said, ‘Why did you do that?’ and tell me to think about what I had done.”

Now Sobieski is all grown up and she’s undeniably a bona fide actress in her own right. But what sets her apart from other actors is her versatility.

It’s amazing to see how she can play a geeky high school nerd opposite Drew Barrymore in Never Been Kissed, then switch things up by playing Chris Klein’s love interest in the tearjerker Here on Earth. And let’s not forget her performance in the nail-biting thriller Glass House.

A striking beauty with dark blonde hair accompanied by greenish-blue eyes, Sobieski has proven her acting abilities in the world of cinema. Her resumé is peppered with movies and TV shows from almost every genre imaginable.

“All of my films go in all different directions,” she says. “I’m always doing opposite things. I think it’s boring to be just one thing.”

Still Sobieski continues to live with an open mind. Her choice of roles makes it evident how adaptable a person she can be with the freest mind.

“Or if I just want to relieve some stress. Sometimes you just got to see something in a way not because you think it’s going to be the best but you just want to get away for a second.”

Sobieski’s latest film, In the Name of the King: A Dungeon Siege Tale, only adds to her flexibility as an actress. The fantasy film, directed by Uwe Boll (House of the Dead, Alone in the Dark), is based on the video game series “Dungeon Siege.”

It also stars Burt Reynolds (The Dukes of Hazzard), Matthew Lillard (Scooby-Doo) and Ray Liotta (Smokin’ Aces), and tells the tale of a man named Farmer who fights for revenge against the evil animalistic group the Krugs, for killing his son and kidnapping his wife. Sobieski plays Muriella, the daughter of a mystical advisor named Merick (played by John Rhys-Davies) who helps the king of Farmer’s village avenge the Krugs as well.

So now we get to see Sobieski as a warrior, too! Without a doubt, her creative possibilities have soared – there seems to be no role that this woman cannot handle. Thus, she dives right in.

“My favorite role is always the last role that I play, because I get so invested in each project,” she adds.

Though she does confess that it’s sometimes difficult to choose a role.

“There are some roles you really want that they won’t give you and other times I choose my roles based on whether I think it would be interesting to investigate [the character’s] mind.”

Sobieski does invest a lot of thought into every aspect of the filmmaking process when it comes to choosing a role. She thinks about the other people who are involved, the director, the producer, the actors and even the location. But, obviously, the script is most important, she admits.

“The director and the script are always the first thing and then the character because you can make any character interesting.”

Owning her character’s essence and making it believable onscreen is something she’s been able to do very well.

Who would have thought such remarkable talent would derive from a young school girl who had an appetite for acting in third grade? Yet Sobieski has grown and her list of work continues to flourish.

“I think of myself as a serious actress,” she says. “I take my job really seriously but I think it really sucks when people just get too serious about it because it’s just a movie and it’s OK to have fun.”

It’s very rare that one comes across an actress like Sobieski, who thinks Lil’ Wayne is the hottest rapper on the scene and alternately says that she would go on a date with William Faulkner, author of one of her favorite books, The Sound and the Fury.

“You want your brain to be just so invested in what you’re watching that you want to leave and think about [the film] for days on end. And you kind of just want to have fun. And that’s it,” she concludes.

In the Name of the King: A Dungeon Siege Tale releases in theaters Jan. 11.