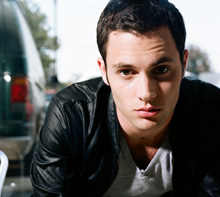 For those of us who exist in reality, CW’s new hit show “Gossip Girl” seems about as realistic a portrayal of normal teenage life as Harry Potter – they’re just trading magic for Manolo. There’s the impossibly beautiful ice princess, Blair Waldorf, her well-intentioned but relatively spineless boyfriend, Nate, and their evil and manipulative friend, Chuck.

However, she’s also the one who lands the greatest catch on the show: her boyfriend, Dan Humphrey, played by Penn Badgley, previously seen in the film John Tucker Must Die. Dan is smart, funny and likable; he is grounded and from a relatively modest background.

Badgley might say it best when he describes Dan as the “voice of reason for the audience.” Dan is the guy we all want to be best friends with. Many girls I know also wouldn’t mind making an honest man out of him.

Not that he’d need any help in that department. Dan may well be too honest.

“On the page, I often feel like he’s maybe a tad whiney or a tad self-righteous,” Badgley says.

It’s hard not to be, especially in a place teeming with wealth and privilege, where most of Dan’s adopted social circle spends money like water and completely debauch themselves on weekends. Given the elitism of all the show’s other characters and how divorced from reality their lives seem, it often surprises me that so many high school and college students find it so addictive.

Badgley, however, believes that certain universal truths ring true regardless of material discrepancies.

“All students are very vulnerable, regardless of what privileges they have,” he says. “That’s why some can be really awkward and vicious, and socially unstable. I think people want to watch these shows – these teen soap operas – because people really seem to romanticize their teenage years. These kids are all going through the same issues. It appeals to people so much because they’ve gone through the same thing. It just looks better on TV.”

Badgley himself didn’t have much of a high school experience.

“I only had about a year and a half, freshman and sophomore year, and then I started working so much I had to drop out. Anyway, I had already technically graduated high school (by taking and passing an equivalency exam) when I was 13.”

Yet he considers his high school experience – or lack thereof – uniquely gratifying.

“I have not had anything close to a traditional academic career, and I feel I personally have benefited from it.”

Lack of a collegiate experience did not preclude Badgley’s intellectual curiosity, and at age 14 he was already taking classes at Santa Monica College, where he studied literature, art and photography.

One of the show’s focal points is Serena and Dan’s romance. It’s a textbook star-crossed lovers romance; Serena hails from the Upper East Side, wealth and privilege, and Dan is just, well, a good boy of modest means, from a loving family.

The characters who orbit around them constantly pull at the seams of their relationship. To make matters worse, Rufus, Dan’s father, and Lily, Serena’s mother, were lovers in their youth.

“The relationship between Rufus and Lily is about to come to a head, and eventually strain Serena and Dan’s relationship,” he says.

Badgley is excited for ensuing conflict between Serena and Dan, because it will give him a chance to explore different sides of his character.

“Right now, Serena and Dan are very happy together but because it’s a show you know they’re eventually going to break up. I’m excited for it; it’ll give them places to go emotionally. It’ll give them some depth. I would love to see change.”

It would be a great chance for Badgley to show off more of his talent, and really ignite the rest of his career.

“I was a little hesitant to sign on, because as positive as any opportunity can seem, change is always daunting. But, this is the happiest I’ve ever been in my life. To be able to do what I love doing, it’s great. I feel good.”

“Gossip Girl” airs Wednesdays at 9 p.m. on the CW.