Fair to Midland: A success of Fairy Tale Proportions 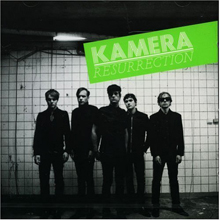 One thing you can’t say about Fair to Midland is that they’re an overnight success. The Texas quintet has survived over eight years with various lineups.

Their name derives from an old term for cotton fields. “Fair to Midland” is the grade of cotton that’s midway to mediocre, a pun on their own abilities.

In 2005, the band came dangerously close to quitting. The small club circuit in Texas and the feeling that they were going nowhere took a toll on them.

They played a gig that same year, during which a fan offered to show their demo to a friend. Much to their surprise, the fan’s friend turned out to be System of a Down frontman Serj Tankian.

Tankian signed them to his Serjical Strike label, and their association with him led to Fables From a Mayfly: What I Tell You Three Times is True, their major label debut album.

Acclaimed performances, such as Coachella back in April, their stint in Europe supporting Tankian on his first solo tour and most recently at the Troubadour on Dec. 6, where they kicked off their first headlining tour in the United States, have brought the band closer to the sweet nectars of success.

Stowers is appreciative of the band’s association with Tankian, but is not too fond that “people expect us to be System of a Down and then find out that we’re not.”

Fables is the band’s major label debut but does not entirely consist of new material. It contains reworked songs from 2004’s Inter.Funda.Stifle, among new tracks.

It is written “in the form of a creepy children’s book,” explains Stowers. If that isn’t obscure enough, try their lyrics.

Just look up “Kyla Cries Cologne” on any search engine. Fair to Midland purposely leave their lyrics out of their liner notes to encourage their fans’ open interpretation of their lyrics.

Aside from obscurity, the eloquence and execution of their songs is nothing short of amazing. The erratic nature of “Dance of the Manatee” alternates between melody and metal-esque vocals, providing the listener with the best of both worlds. Slower tracks like “Say When” offer a sense of tranquility before closing the album.

Fables offers the casual listener the spontaneity of progressive rock mixed with the ferocity of heavy metal, a perfect one-two combo that is sure to leave many jaws open by the end of the album.

Stowers is reluctant to call this past year a success. He stresses that the band still has a lot to prove.

They seek to establish an identity for themselves without having to rely on Tankian’s popularity as a means for success. Aside from establishing an independent identity from Tankian, they also strive to avoid becoming a “sell out” band just because they are on a major label.

The band is conscious of commercial needs like radio singles, but will not compromise its fan base in order to get radio airplay.

“Serj has been the middle man between [Fair to Midland] and the record label,” admits Stowers.

It is because of Tankian’s contributions that the label has given them more control than any other band in their position.

Next year will see the band touring much more and possibly laying the groundwork for the follow-up to Fables.

Perhaps the only thing more impressive than Fables is the band’s live show. Sudderth’s eccentric live performance, which has been likened to that of Iggy Pop by many critics, is sure to guarantee a memorable concert or at least a “did he just do that?” from you or one of your concert buddies.

The musicianship of this band surpasses anything any other current band is doing. Before they become one of those bands that sells out a venue during presale, do yourself a favor and check them out.

Fables From a Mayfly: What I Tell You Three Times is True is currently available. For more information, visit www.fairtomidland.com