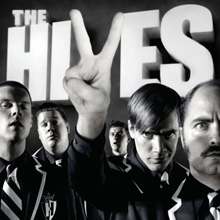 What is it about the Hives that makes me want to wear black and white suits and start a rock band? Maybe it’s their unabashed cockiness or their dreamy Mick Jagger look-alike singer, Pelle Almqvist.

Regardless, the Swedes that breathed pop magic into rock and roll five years ago are back in action and expanding their horizons. The Black and White Album, the Hives’ fourth full-length, is as eclectic as its contributors.

In addition to recording seven songs with Pharrell, there were also sessions with Timbaland, Jacknife Lee (U2, Green Day, Snow Patrol) and Dennis Herring (Elvis Costello, Modest Mouse). The result is funk-infused, bass-heavy songs (“T.H.E.H.I.V.E.S,” “We All Right”) alongside creepy instrumental organ interludes (“A Stroll Through Hive Manor Corridors”), with plenty of room left over for some typical Hives anthems (“Tick Tick Boom”).

By pairing new sounds with album-tested techniques, the Hives made a new album that is mature and different, while still being quintessentially Hives, proving their cockiness to be most appropriately earned.