Saves the Day: Under the Boards
(Vagrant) 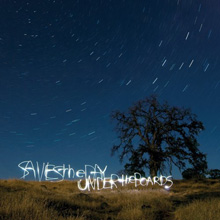 Saves the Day has undergone a lot of change since their hit album Stay What You Are. They completely overhauled their style with In Reverie and are now in the midst of releasing a trilogy of sorts, of which Under the Boards is the second.

Their sound has stabilized somewhat, with a good mix of pop and rock in their sound. Embracing the emo, Saves the Day presents their angst with some truly beautiful songs, such as the title song, “Under the Boards,” “Stay” and “Kaleidoscope.”

At the same time, other songs drag on and sound a bit too much like one another. Still, Saves the Day has managed to experiment and evolve while still maintaining the core sound that made them famous in the first place.

Under the Boards is currently available.