(Bomp)
By Bourbon With Brendan 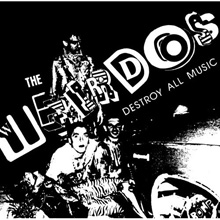 “I wanna kick in the radio. I wanna bomb the record store. I said … destroy all music. I say … you just can’t use it.”

You might think these lyrics from the Weirdos’ 1977 single “Destroy All Music” are not the best words of promotion to send people out to the record store, but for a punk disciple in the late ’70s nothing could be more enticing. Just like Primus embraced the ’90s statements of irony zeitgeist by encouraging their true fans to yell “Primus sucks!” the Weirdos embraced the nihilistic subversive zeitgeist of the 1970s by telling fans to destroy all music.

This 30th anniversary edition CD compiles the Weirdos’ unreleased demos and their 1979 “Who, What, When, Where, Why?” mini-LP. Although the native Los Angelean band tried to set themselves apart from the movement of the times by claiming they were weirdos and not punks, their sound is as punk as it gets.

Any fan of the genre who wants to extend their collection beyond the overplayed songs of the Sex Pistols, the Clash or the Ramones should consider giving the Weirdos a place in their collection; file under P for punk or W for weirdos – your choice.

Destroy All Music is currently available.