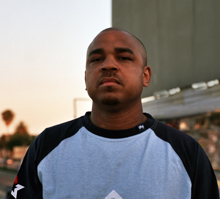 In 2003, around the same time the Game signed to Aftermath, L.A.-based producer Khalil “DJ Khalil” Abdul-Rahman found himself sitting face to face with Dr. Dre.

“I want to sign you as a staff producer,” Dre told Khalil, the son of Walt Hazzard, former Los Angeles Lakers player and UCLA basketball coach. “I want you as part of the family.”

“I grew up listening to Dre, so to be working with him and the fact that he really likes my music is dope.”

Since that fateful day when Dre was mixing 50’s first album, Get Rich or Die Tryin’, Khalil has soaked up much beat science from his mentor.

“Dre taught me how to make a record rather than just a beat. It’s about bringing quality and not BS. I’m making the transition from being a beat maker to being an actual producer. Finishing a record. That’s what Dre does. I’ve definitely stepped it up. The records I placed with 50, the Game and Jay-Z were already done.”

He placed a few joints on Talib Kweli’s Listen!!! mixtape, and he produced the hit “I’ll Still Kill” featuring Akon, the fifth single released from 50’s latest CD, Curtis. To top it off, he’s submitted tracks for Dre’s highly anticipated Detox. “Before it was me sitting in a room with a machine making 10-12 beats a day,” shares Khalil. “That’s all I did. I’m trying to incorporate live musicians. I still love to sample. I will never give that up. But I’m also collaborating more. I want to have all those creative juices going into one product. The music comes out that much better.

“I listen to records for ideas, to get a vibe going. I’m really good at sound design. I can listen to a record and figure out how they are mixed and how they made the guitar or synthesizer sound, and I know how to copy that and put that into a beat. I spend a lot of time tweaking. I try to recreate what I hear. I’m a tweaker.”

Though he’s an Aftermath staff producer, Khalil’s not assured automatic placement on every project.

“You’re a part of the family but there’s no real favoritism, so you got to step it up,” he explains. “You got to earn your stripes. That’s what I’m doing. You’re still competing against Just Blaze, Timbaland, Denaun Porter [D12]. I can tell Dre I have a crazy record and play it for him. I have the inside track. That’s the advantage.”

Recently Khalil has been working on future albums for Nas, Jim Jones, the Game and Bishop Lamont and has formed an alternative group called the New Royales. He also created tracks for an upcoming animated feature film, The Blockheads.

In addition to pushing his own beats, Khalil runs Angeles Records with DJ Muggs and his Self Scientific partner Chace Infinite. The label will release two projects in 2008: Self Scientific’s Come In Peace, Prepare For War and DJ Muggs’ Soul Assassins 3.

But at the end of the (pay)day, it all comes back to Dre.

“He saw something in me from day one,” tells Khalil. “It’s a great thing.”