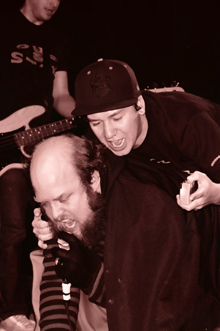 The morning after, there’s still some cotton lying around the Wilshire sidewalk, even a block west of the El Rey. The night prior, Tim Harrington had slashed the undersides of five or six giant teddy bears until cotton stuffing was floating overhead like a timely splash of snow.

Santa Tim was wearing only red briefs, a cheap red jacket and some shiny black boots at this point of encore, fresh from bouncing an audience member on his lap and promising antics far worse than whatever mischief said fan would lay claim to while making his gift wish.

This encore wouldn’t get any raunchier than the band’s initial 45-minute set, though; already, Harrington had plowed through the crowd, kissed several boys and girls up front, caressed his generous belly and spat fountains of Arrowhead. While he was busy declaring that “bodies are fun,” guitarist Seth Jabour tossed out a brilliant supply of riffs just as tightly as he has on each angular album the band’s released since 1997.

Meanwhile, the recent addition of Andrew Reuland meant doubled-up guitars that held beautifully during old favorites like “Scout’s Honor” and “Who Rocks the Party,” simultaneously battling and complementing the strength of one of indie rock’s best rhythm sections.

But then there were bears. If any tubby, golden-haired beast can win a crowd’s affection – yes, it’s Tim Harrington, but the next best bet is a stuffed bear. Unlike Harrington, though, a giant bear can be ripped apart by fans hungry for a piece of anything that’ll give way, and it wasn’t until after the show, when we stepped over a floor of cotton, showed off what paws and heads we’d claimed, watched a mad fan run through Wilshire traffic while waving a bear’s head, that we understood the cult to which we perfectly belonged.