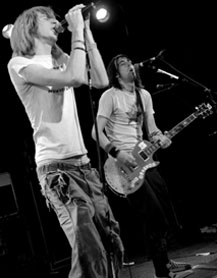 Taking the stage at one of the Sunset Strip’s most renowned venues is often a daunting task for any band. But watching this group of New Zealanders take command of The Roxy makes you think they’ve been playing large venues for most of the five years that they’ve been together. It’s an ease that Steriogram has developed from touring any venue possible in their native country before storming through clubs across the US.

Vocalist Tyson Kennedy seemed right at home as he belted out his fast-paced rap vocals from every point on stage before weaving his way through the audience. A strong connection was evident between the solid rhythm section of Jake Adams on bass and Jared Wrennall behind the drums. Complimenting the manic vocals and pulsating beats were explosive rock riffs from Tim Youngson and Brad Carter on guitars.

Steriogram’s set showcased several songs from their debut album, Schmack!, including "Fat and Proud," "White Trash" and "Go." Carter provided the highlight of the evening, taking over lead vocals on the heartfelt "Be Good to Me."

Steriogram performing their current single, "Walkie Talkie Man," was an energetic close to the night. The song is currently being featured in iPod commercials, and its music video, directed by the famed Michel Gondry, garnered an impressive four MTV video award nominations.