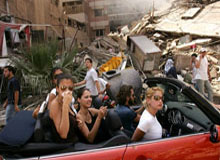 UCLA athletic director Dan Guerrero has chosen Rick Neuheisel, a former UCLA quarterback who led the Bruins to victory in the 1984 Rose Bowl, as the new head coach of the UCLA football team.

Says Neuheisel, “I am thrilled to be returning to my alma mater as its head coach – UCLA is a special place.”

Award-winning writer-producer Alan Gansberg has been named Dean of the College, Academics & Faculty of Columbia College Hollywood. Gansberg began teaching at the distinguished film school in 1995. In 2000, he was elected the inaugural president of the College’s Faculty Association and eventually became Senior Department Chair.

The 200 images in the exhibit are drawn from nearly 80,000 entries submitted by more than 4,000 photographers. The images document the year’s most important events and are meant to “elevate the public discourse on some of the most pressing issues of our time.”

Mary Nichols, chair of the California Air Resources Board, will talk about the ways in which California will implement the climate change law AB32. Nichols will discuss plans to implement the legislation as well as regulations that would provide cleaner air for Southern California.

The lecture will be on Jan. 18 and is free and open to the public. It begins at 1 p.m. at the Davidson Conference Center’s Club Room on the University Park Campus.