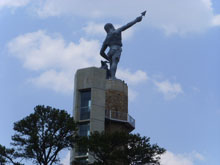 If you’re some kind of super evildoer and you pull into Birmingham, Ala., you better just keep moving, mister! Vulcan is watching you! Do you want to mess with a guy who is 56 feet tall and strong as steel? I didn’t think so!

Birmingham’s Vulcan statue is perched atop Red Mountain, a place where he’s been on lookout duty for over 100 years. An embodiment of the Roman god of fire and forge, it’s easy to gaze up at the world’s largest cast iron statue and imagine him alive as a superhero.

But Birmingham Vulcan represents real heroes; the countless men and women who’ve toiled in one aspect or another of the steel industry, the hard-working folks who built a strong base for a flourishing city. You can learn about Birmingham’s industrial history here at the Vulcan Center, and you can also take an elevator in the statue’s pedestal to an observation deck for an unparalleled view of the city.

There’s always some type of activity going on here too; in the fall the park hosts Vulcan AfterTunes Concert Series, featuring local performers and national acts like Bobby Bare, Jr. Yes, Vulcan rarely gets lonely. The big guy has lots of friends.

Birmingham offers a wide variety of attractions ranging from the whimsical (the Peanut Depot) to the somber (the Sixteenth Street Baptist Church.) The Peanut Depot is exactly what the name indicates – headquarters for the tasty goobers. This is not a fancy place; the roasting ovens are in plain view and if you arrive at the right time you can see them in action.

If you want to buy a couple pounds of nuts you couldn’t get them any fresher than here. You can even get them prepared the uniquely Southern way – boiled – an acquired taste.

Most people who make a visit to Birmingham want to see the Sixteenth Street Baptist Church. This is the church that was bombed in 1963 at the height of racial conflict, resulting in the deaths of four young girls.

The church has a memorial nook with lots of memorabilia from the sad time, including the church clock that stopped at 10:22 a.m., the time of the bombing. The viewing of a movie about the incident, Angels of Change, is included in the tour of the church.

This whole neighborhood is now a symbol of the civil rights movement – across the street is the Birmingham Civil Rights Institute and across another street from there is Kelly Ingram Park, where there’s statuary representing the struggle, including one of Martin Luther King, Jr.

Music fans will find plenty to like about Birmingham. The city has lots of venues for live music and a wide variety can be heard on any given evening.

You may know that Birmingham has the magic touch when it comes to “American Idol;” Ruben Studdard, Taylor Hicks and Bo Bice all hail from the area. The city hasn’t honored them with statues yet, but it has honored another hometown musician, Eddie Kendricks.

The Eddie Kendricks “wall” is a photogenic memorial to the late Temptations singer. The homage features a large statue of Kendricks on a “stage” with the wall behind him chronicling the hits of the Temptations.

If you happen to visit Birmingham in mid-June you may have a little trouble navigating the downtown area by car. That’s OK, though; the streets are closed off for the annual City Stages Festival, a massive celebration of music. For this, you may as well plan to spend the weekend hopping between the half-dozen stages and checking out performers like Hawthorne Heights, Dr. John, Bruce Cockburn, Birmingham J, Marcia Ball, Poison, the Red Jumpsuit Apparatus and dozens of others.

And no music lover will want to leave Birmingham without stopping at the Alabama Jazz Hall of Fame. The museum is filled with lots of cool displays, including memorabilia from another hometowner, Sun Ra. If you’re really lucky, you’ll run into Dr. Frank Adams, Executive Director at the Hall and former member of the Duke Ellington Orchestra.

To plan your visit to Birmingham, visit www.birminghamal.org.