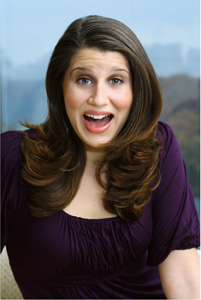 There’s something endearing about the underdog, a role that actress Erin Fogel has been cast in for much of her life. Fogel, who plays Shari Rabinowitz opposite Katherine Heigl in the highly anticipated film, 27 Dresses, started life as the awkward one, frequently discouraged from her dreams of stardom.

“I hear a lot of the greatest actors in the world from all different times and decades say, ‘I wasn’t supported,’” she says. “I almost think to myself, ‘The teachers should know better by now!’” Fogel laughs.

“They should look at someone and say, ‘Gosh, she’s unattractive, she has no talent, she’s awkward. She’s gonna be a big deal!”

In the film, Fogel is the bride in a Jewish-Indian wedding.

“What’s funny,” she remembers, “is that you look at the room of people, and quite literally [during] the ceremony scene the right side of the house is all wearing yarmulkes, very Jewish, and to the left everyone is very authentic Indian. Then [she] brings them all together to the YMCA!”

Jane, played by Heigl, is Rabinowitz’s maid of honor and plays the same role at another wedding on the same day, which she must go to great lengths to prevent either bride from discovering.

Fogel relates that she is often told in her auditions that she is funny and has a lot of charisma but is also very Jewish, which worked in her favor for her role in 27 Dresses, snagged without a call back. The producers were so impressed by Fogel’s initial brief performance in the film that they added an extra scene to accommodate more of her star power.

One to watch in the future, Fogel is currently working on a short film entitled Homeward Bound with director Jesse Schoem.