The Year My Parents Went On Vacation: The Importance of Being Lonely 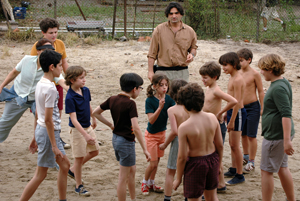 Brazil’s official selection this year for best foreign language film is as delightful and moving as it is unexpected. The Year My Parents Went on Vacation tells the story of 12-year-old Mauro, a soccer fanatic, whose parents are on the run from the military dictatorship.

The year is 1970: the Brazilian national soccer team is vying for its third championship in the World Cup, and repression by the military police is at its height. Mauro is left at the doorstep of his grandfather’s apartment in the old Jewish neighborhood of Bom Retiro in Sao Paulo.

He is soon discovered by Shlomo, a neighbor, when something unexpected happens to gramps. Shlomo reluctantly takes Mauro in, and so begins a new life for them both.

Though the story itself is simple, the issues raised are numerous. The film is a coming-of-age tale for young Mauro, and through his eyes we also gain a fascinating glimpse into the Jewish community of that time and place, a community trying to maintain traditions while redefining themselves as Brazilians.

Likewise, the film explores the peculiar subject of Brazilian identity and pride and how these sentiments were challenged and confused under the oppressive military regime. The great excitement and unity among Brazilians during the World Cup as soccer star Pelé leads the national team to the finals is contrasted by the isolation of individuals and the collective impotence in trying to topple the dictatorship.

Director Cao Hamburger talks of his film as though he’s still trying to understand it himself.

“I think the film talks about loneliness,” he says. “About the importance of loneliness … how we need to be alone to find ourselves.”

Hamburger speaks slowly, methodically, measuring the value of each word. English is not his first language, yet there is something relaxed, pensive and calming in his delivery. It is not unlike a quality in his film, a sort of philosophical inquiry, deliberate and thorough.

Vacation is only the second feature length film for Hamburger. It has been more than two and a half years since he wrote the first treatment, the beginning of a process that would involve three other screenwriters.

Listening to Hamburger speak of his life and career, one senses that this film has an even longer history. While the story is not directly autobiographical, the director was the same age in 1970 as the protagonist Mauro. And like Mauro, Hamburger’s father was Jewish while his mother was not.

It has been suggested to the director that the story could have been set among any ethnic immigrant community.

“We could,” he responds, “but it fits so well in the Jewish community because of their history. It helps them to understand Mauro’s situation.”

The “history” goes unmentioned in the film, and Cao prefers it this way.

“In Brazilian cinema we are often too explicit,” he explains, “and when you are too explicit you lose your strength.”

It is the unmentioned that takes on an ominous presence in the film. There is no reference to the Holocaust and yet the experience can be felt among the elder Jews, specifically in the life-weary manner of Shlomo.

In yet another instant of restraint, the word “dictatorship” is seen but once in the entire film. The result is subtle yet profound.

It is interesting to learn that the majority of Hamburger’s career has been dedicated to the enormously popular Brazilian kids’ show, “Ra Tim Bum Castle.”

“This film is my crossover into the adult world,” says Hamburger. “It is like my Bar Mitzvah.”

Brazil’s selection of the film to the academy this year shows the remarkable changes of the nation and a certain willingness to confront its painful recent history. The dictatorship ended only 22 years ago. The fact that such a film could be made at all says something about the health of their film industry.

As for the progress of the Brazilian nation, Hamburger comments poetically: “We are still not healed, but we are going in a good direction. We are like a patient at the hospital. No longer in the ICU, we are now in the [hospital] room.”

The Year My Parents Went on Vacation releases in select theaters Jan. 18.