College Tonight: An online boost to get you offline! 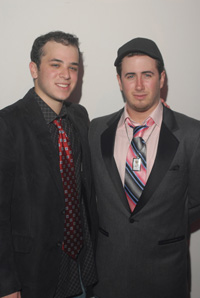 In recent months, I’ve started to (sadly) admit to myself that there may be an inverse correlation between the amount of time I spend on Facebook, stalking “friends” and the amount of “friends” I actually see and interact with in real life.

The founders of College Tonight, though, assure me that just because we’re an Internet generation doesn’t mean we’re doomed to be better at navigating cyber space than real space. Thanks to the online social networking site we’re starting to see ways we can be cyber-savvy and still real-world socializers.

College Tonight, which uses the Internet to get college students offline and out to see each other, has very organic origins, according to 23-year-old Zach Suchin, co-founder and self-proclaimed “marketing guy.”

“By senior year we had 80-90 percent of the student body registered. My intention had just been to create a forum, but it became this whole school-wide thing. It was just such a great resource for students.”

Though Suchin had the marketing pitch in his head already, he needed a business partner who would help him to lay a practical foundation for his new venture. He found that in then-sophomore, 20-year-old Jason Schutzbank.

Unlike Facebook, College Tonight is not about accumulating what Suchin calls “a rolodex” of friends you can periodically check up on. Rather, it’s a site meant to inspire college students to get up and get out, and actually see each other.

“Basically, we want to be a central part of college life, and just facilitate what people normally do in college,” Suchin says. “We just make it easier through technology.”

Say you’re going to a formal at your school. Make a (discreet) list of all the people you’d potentially take as dates, and wait. If the system identifies any overlap (if you list a girl who lists you, for example) you’ll be notified. The site is smart, slick and easy to navigate.