27 Dresses: Katherine Heigl on Weddings, Relationships and a New Year 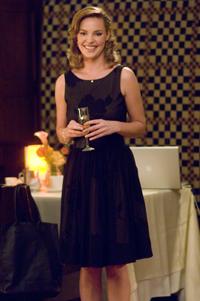 What more could Katherine Heigl ask for in the New Year? As of now, the Hollywood “It Girl” seems to have it all.

In 2007, she won an Emmy Award and earned a Golden Globe nomination for her role as Izzie Stevens on ABC’s critically acclaimed drama, “Grey’s Anatomy.” Later in the year, she established herself on the big screen in Knocked Up opposite Seth Rogen. People magazine chose her as one of 2007’s Most Beautiful People, and as the year came to a close, the stunning actress wed rocker Josh Kelley in a fantasy Christmas wedding in Park City, Utah.

It was a blockbuster year for Heigl, and she’s ready to take 2008 by storm.

Heigl’s first feature film of 2008 starts the year off with a bang. She plays Jane, a young woman that’s always a bridesmaid and never a bride in 27 Dresses. It’s obvious from the film’s title that Jane has been a bridesmaid 27 times, and has all 27 hideous dresses to prove it.

Throw in some sexual tension with her boss, George (Ed Burns), some sibling rivalry with younger sister Tess (Malin Akerman) and some wedding cynicism from wedding reporter Kevin (James Marsden), and 27 Dresses is a romantic comedy that examines the always-a-bridesmaid lifestyle with no happy ending in sight.

The opening scene shows her as a bridesmaid in two weddings in one night – traveling back and forth from Manhattan and Brooklyn, doing the electric slide at both receptions.

“I can’t imagine anyone ever doing that,” jokes Heigl, “but it was a really fun idea.”

There’s also a drunken duet of “Benny and the Jets” (Heigl’s favorite scene) sung by Heigl and Marsden that is laugh-out-loud funny. The film’s release has coincidental timing because Heigl recently had a real-life wedding.

“There’s been a lot of wedding talk,” Heigl assures.

When asked if she’s the type of girl who obsesses about weddings and romance, she confesses: “I do love a good wedding, but I’m not that kind of girl, really. I shy away from being lovey-dovey and am not terribly sentimental.”

In her relationship with Kelley, she explains that she doesn’t really make any grand gestures when it comes to romance and finds love in the little things like making dinner at home together.

What’s the secret to a great relationship?

“Laughter and communication,” Heigl reveals. (She agrees with Burns that separate bathrooms help.)

Overall, Heigl isn’t like the character Jane she plays at all, but she loved the character very much, and saw it as a great opportunity to do comedy. Heigl explains that Jane starts out as a doormat and the audience watches her progress throughout the film as she’s forced to help her little sister plan a wedding to the man she’s secretly in love with.

So what does Heigl expect in 2008? She hopes to maintain a now-charged film career. She’s hoping that 2008 is just as wonderful, but in a different way.

“It’s been a very grueling year of work, and it’s been very exciting,” she says. “I’ve spent years doing nothing but napping a lot and watching ‘Survivor,’ so I’ve reserved energy for it!”

In 2008, she not only wants to keep her film career going strong, but she also hopes that the writer’s strike in Hollywood will come to an end soon. As for her Golden Globe nomination this year, even though the awards ceremony won’t take place she admits that she “really, really, really” wanted to go.

Despite all the fame and success she has gained in 2007, it doesn’t seem like it has gone to Heigl’s head.

“The nature of my career certainly changed drastically,” Heigl explains. “No one used to care when I went to Ralph’s. I still don’t care,” she laughs. “I’m just trying to keep perspective in 2008.”