The Business of Being Born: Ricki Lake Shows Her Baby Off to the World 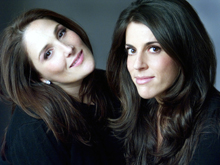 She danced her way into America’s heart as the original Tracy Turnblad in John Waters’ Hairspray. Her girlish giggle and panache for getting trannies and unfaithful boyfriends to confess made her self-named talk show a success. Now Ricki Lake has a new passion that she’s ready to unleash on the world: her baby.

No – she’s not pregnant. This time the baby is a new documentary that she’s produced called The Business of Being Born. The film seeks to dispel the illusion that so many people have about birth.

“If you can empower the system and empower the women, you have the chance at really making a difference,” says Lake.

Part of the message she and her filmmaking partner Abby Epstein want to get across to audiences is the war being waged between midwives and allopathic physicians in the United States. Throughout the world, 70 percent of all children are born with the aid of a midwife. However, in the United States, that number drops down to a staggering eight percent. A large reason for the difference, according to Lake, is lack of choice for women.

For the birth of her first child, Milo, Lake and then-husband Rob Sussman were like many expectant parents. They went into the hospital with all the hopes and excitement of having a natural birth. When D-day rolled around, the couple realized that there was a lot more intervention (use of drugs, “modern medical” practices) than they were initially expecting.

“I’m not bashing my first birth,” she says. “I’m so grateful that I have two wonderful children and that I was able to give birth to them vaginally.” By the time her second child, Owen, was born, Lake opted to use the services of a midwife and have the experience in her home. His entrance into the world is documented within the film.

Lake appears in her bathtub, fully nude, giving birth. As a matter of fact, many couples allowed their children’s deliveries to be used in the movie.

Epstein, Lake’s good friend and director of The Business of Being Born, provides the film’s most tense moments when her own son Matteo nearly entered the world in a taxicab. His birth was to take place in the home until it was discovered that he was in a breach presentation.

Lake makes it clear that she doesn’t feel that it’s a contest between the two factions: “It’s not about natural birth vs. intervention. It’s about having a positive birthing experience.”

So why is the film’s message so controversial? It stems back to the early 20th century. As modern medicine began to take shape in the United States and big business sought to make money from that process, there was too much competition in the child delivery world. Smear campaigns were often waged against midwives in the form of negative advertisements that depicted shriveled up elderly women and unflattering photographs of immigrants with captions such as, “Would you allow this woman to deliver your baby?”

Nowadays, it’s a matter of convenience. Many expectant mothers are career-savvy, big-city dwellers. They schedule their C-sections around expensive facials and pedicures.

Stars like Britney Spears and Angelina Jolie are noted for having undergone the procedure themselves. The term “too posh to push” has even been coined because of this growing phenomenon.

Most people have not taken the time to stop and realize that Caesarian sections are, in fact, a major surgical procedure. Is it really in the best interest of the child and mother to allow nature to take its course in the birthing process or to let trained OB/GYNs do their thing?

“I don’t want to judge any woman for her choice,” explains Lake. For her, it comes down to education.

“I think if you can show natural birth in a different light,” she says, “it can really make a difference.”

The Business of Being Born releases in select theaters Jan. 16.