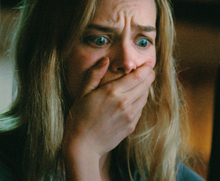 The concept of the Sundance-approved independent drama Teeth is sure to get a laugh. The film follows the story of Dawn, a teenage virgin who is the most active participant of a local chastity group, who discovers that (wait for it) her vagina has teeth.

She becomes the living example of the Vagina Dentata myth and must learn to deal with the pitfalls and strengths of having such an unusual anatomical mutation. What could have been a campy exercise in gory horror clichés and obvious metaphors is in reality a thoughtful piece on the female/male sexual dynamic.

While the film does play into several male stereotypes (all the men are essentially bad news), director Mitchell Lichtenstein is wise to keep the focus on Dawn’s budding sexuality, and as such, the film comes across as a coming-of-age tale with a horrific twist. Sensitive males, beware! There are several shots of severed penises and bloody stumps to satisfy the gore hounds.

The violence is over the top but this is still a drama grounded in character. Jess Weixler embodies the role of Dawn with an unusual realness that sees her change from uptight virgin to sexually confused to empowered diva. Teeth is pure fantasy and may not be for everyone, but the fact remains that it’s a rather compelling female sexual empowerment fantasy for the new millennium that gives the word “man-eater” a whole new meaning.