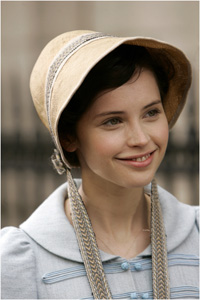 “Literature and solitude are as necessary to a young girl’s development as sunshine is to ripe fruit.”

So wrote Jane Austen in her novel Northanger Abbey.

If the recent spate of Austen adaptations and tribute films like Becoming Jane and Jane Austen Book Club are any indication, young girls apparently need a steady diet of Austen for a healthy development.

PBS’ “Masterpiece Theatre” apparently thinks so. Beginning in January, fans will be able to watch adaptations of all six Austen novels back to back. As Andrew Davies, the prolific and brilliant adapter of four (Northanger Abbey, Sense and Sensibility, Emma and Pride and Prejudice) says of the productions, this “will be good for college students studying them.”

“Masterpiece Theatre” will show Davies’ first Austen adaption, the definitive Pride and Prejudice, from 1995. An older version of Emma will also be shown, starring Kate Beckinsale, along with four spanking new adaptations of Sense and Sensibility, Mansfield Park, Northanger Abbey and Persuasion.

Just why does Austen continue to be so fascinating to a 21st century audience? According to Davies, “People are constantly rediscovering how relevant she can be to our concerns like love and independence. She’s quite hard-nosed about things like sex and money – quite modern – and she tells a story better than anyone else.”

“I loved Clueless,” remarks Davies. “It’s quite a brilliant update. I also liked Pride and Prejudice a lot. They are quite universal stories in terms of love and longing.”

Apparently, Davies has just about cornered the market on Austen. According to him, there’s a secret to a successful adaptation: “Prop the book up and copy out the best bits of dialogue. The best thing is to trust Jane Austen. She gets most things right.”