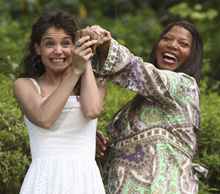 Once upon a time, there was a beautiful maiden named Katie Holmes. She was the youngest of five children born to Roman Catholic parents in a land far, far away (Toledo, Ohio, to be exact).

As a teen, she took the television world by storm as Joey Potter, the verbally adroit girl-next-door on “Dawson’s Creek.” The film industry soon came a-callin’ resulting in memorable roles as – you guessed it – the all-American girlfriend type.

Holmes played Libbets Casey in Ang Lee’s The Ice Storm. She was Claire Montgomery in the raver epic Go. Then, she re-teamed with her Ice Storm costar Tobey Maguire for 2000’s Wonder Boys. Yet, despite each of those projects and the others that followed soon thereafter, not even the most gifted writer could have penned the rest of this fairy tale.

In recent years, Holmes has become the fairer member of TomKat, Hollywood’s most talked about power couple. After meeting with action star extraordinaire Tom Cruise in 2005, love soon blossomed.

What moviegoers may not have realized is that during the tabloid press melee that would become her everyday existence, Holmes had been quietly honing her craft and sharpening her skills for what is being called a breakthrough performance. In Mad Money, the 29-year-old actress stars as Jackie Truman, a character unlike any she’s played in the past.

Jackie is a flirty, flighty, wild child whose go-with-the-flow attitude lights up the screen. She dances around with complete abandon, moving joyously from scene to scene.

Callie Khouri, the film’s director, is even aware of the unique intricacies of Holmes’ performance.

“I had never seen her as a character as extroverted as this character.”

The leggy actress also personally weighs in on playing her part: “It was very different than anything I had done before. I like people like that who are seeking something more.”

In the feminist crime comedy, Jackie works in the carts department of the Fed – the national bank in which most U.S. currency is handled. When a down on her luck, upper middle class housewife named Bridget (Diane Keaton) takes a janitorial job at the bank, it’s only a matter of time before she develops a scheme to knock off the place.

Carefully, Bridget recruits a single mother of two named Nina (Queen Latifah), then sets her sights on the missing piece to the puzzle: Jackie. Without so much as a word of dissension, the third conspirator is on board. Each woman has a different reason for becoming part of the heist.

Mad Money is written by Glenn Jers, the screenwriter that brought cinemaphiles Fracture (Ryan Gosling, Anthony Hopkins). Both he and Khouri have a natural symbiosis that rarely exists between Hollywood writers and their directors.

This was evident at the onset of production when Jers received his first bit of advice from his boss. Khouri informed him to “Go wild,” adding, “Do whatever the hell you want.”

That lack of constraint made for three of the most independent women to touch down on a movie theater screen in years. Still, there are some detractors who take issue with the film’s premise. Many raise question about how feasible a plot to rip off a staid government institution really is.

The filmmakers aren’t the least bit precious about the storyline. Although the film is based on the true story of a bank robbery by three women in Great Britain, they are quick to suggest that audiences suspend a little disbelief.

“The main thing that this movie is all about is having a good time,” says Khouri.

That sense of fun seems to have shrouded the entire production. Holmes received a wealth of press during the shoot for treating the cast and crew to Chicago deep-dish pizzas that she had flown onto the Shreveport, La. set. Much of her generosity stemmed from the sheer elation of having her family present during production.

“I loved having my husband and daughter on the set,” beams the actress.

According to Queen Latifah, however, her costar’s open heart is just part of her fabric: “She’s just a really cool, laid-back person.”