jesse Dayton & Brennen Leigh: Holdin’ Our Own and Other Country Gold Duets 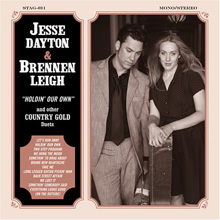 With the continuing rise of alt-country (Wilco, the Jayhawks), fans will inevitably seek out the real stuff. For those interested in traditional country far from the mainstream, Jesse Dayton and Brennen Leigh’s album, Holdin’ Our Own, is a classicist’s treat.

Dayton, who has worked with Willie Nelson and Ray Price, and bluegrass darling Leigh have assembled a dozen vintage-styled country duet numbers in the tradition of Johnny Cash and June Carter Cash or Conway Twitty and Loretta Lynn. Leigh and Dayton’s voices match impeccably on cuts such as divorce drama “We Lost It” and honky-tonker “Two Step Program.”

Although heartbreak is often an undercurrent, hope and romance frequently take center stage, like the pastoral “Take Me” and Chris Isaak-esque “We Hung the Moon.” Choice covers, including “Long-Legged Guitar-Pickin’ Man” (originally done by Johnny and June) and “Somethin’ to Brag About” add to the authentic tone and reverence for what country music should be.

Holdin’ Our Own and Other Country Gold Duets is currently available.