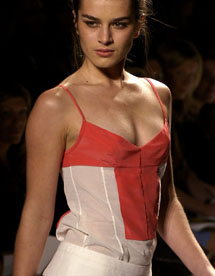 It is a warm Saturday night in New York City, and on a dark downtown block people fill the sidewalk from corner to corner.

They push toward the front door of an art gallery where a hefty security guard holds his ground, sternly urging the crowd to move back. "Clear this area," he yells. "Nobody gets in until you do." The eager visitors, many waving white invitation cards above their heads, keep moving forward.

This event is one of almost 200 presentations of spring clothes on an eight-day calendar, which ended Sept. 15. Many of the clothes are eclectic, heavily embellished and accessorized with almost everything short of the proverbial kitchen sink. They are sometimes ethnic, vintage or whimsically girlish.

The most dominant philosophy is that of mixing, not matching. Many designers have come back to where consumers seem to be: Style is about dressing in a very personal way. And if you don’t know exactly what to do, just add one more thing: a jeweled necklace, a fancy bag, a silver vintage belt buckle the size of a baseball, your great grandmother’s pin or a handful of crystals.

Proportion is on the move, and empire waists are returning. They are especially visible on strappy little bubble-shape, ethnic-print tops that curl affectionately over shorts or jeans.

Flat chests are in. Bosoms appear to be downplayed. A tight corsetlike strapless top at Baby Phat could be considered an instrument of torture.

Knee pants or long shorts are likely to be must-have items. So are lightweight coats and pretty shirts that tie in the front.

The clothes are wildly colorful in yellow, pink, green and turquoise. Or they’re in dusty, muted attic-like shades.

Leatrice Eiseman, the color analyst for Pantone Color Institute, says she surveyed the designers in advance and found the most widely used shade is apple green, a color that is also surfacing in home furnishing.

She says the green is a natural evolution of yellow, which was, and still is, high on the charts. And because information is disseminated so quickly in these days of Internet and reality television, colors move much faster from fashion to home design.

Yellow is traditionally strong in times of war, Eiseman adds.

"It’s an optimistic color, and people are trying hard to be optimistic. You have the idea of ‘tie a yellow ribbon,’ which goes back to the Civil War when the women at home wore yellow in hopes that their men would come home."

Turquoise is the second most popular color. And pink doesn’t seem to go away. "People have grown used to it. They like it. Even men. And designers know that," Eiseman says.

As for the specific collections, Vera Wang, known mostly for bridal gowns and red carpet dresses, staged one of the most stunning shows, mixing a dusty pale color palette with unexpected browns, gold, pale blue and light green.

With a new sportswear collection, she also pulled in a wide range of elements and textures, including high-waist obi sashes, menswear shirts and ’70s crocheted bibs. Linear patterned skirts and loose flowing trousers were the kinds of pieces that kept her audience happily anticipating the next model. She also used fabric from fiber artist Jocelyn Hines.

Holly Hunter, Jennifer Connelly and Nicole Richie ("The Simple Life") were in the front row.

Zac Posen, a young superstar still in his early 20s with a celebrity clientele, had the house in a high roar. Bare, hey-look-at-me dresses with flounces and frills. Colorful print body-skimmers with flared bottoms – they fit so closely they seemed to have been built on the body. With Claire Danes and Paris Hilton looking on, he sent out white shirts with cap sleeves, sexy camp shirts left open in front, tight satin pants, sheer knee pants with button trim and a tunic with clever accordion pleats.

Donna Karan threw a brunch at the downtown restaurant Pastis to spotlight DKNY. But there was no show. It was more like an exhibition, with mannequins perched on the bar and at tables, all seeming to be having a fine time.

What was most striking about the clothes was the heavy embellishment. Picture a pale green plaid metallic shorts suit. Think of a military jacket sprinkled with crystals and a beige flared skirt embroidered with large red and yellow flowers. Add a necklace of native beads and a big round belt buckle. And a long sequined scarf adds glamour anywhere, any time.

And you should see the way they were mixed. While tossing patterns together is nothing new, the mishmash of prints with prints took the idea to another eccentric level.

"This is the way clothes should be seen," Karan explained. "You need to be able to touch and feel them."

Wearing an oversized purple sweater that slid off a shoulder Flashdance style, she described the collection as "eclectic."

Although it had thrift shop feel, she said she looked at no particular era. "Just New York."

Meanwhile, Jeremy Scott, the young designer who grew up in Kansas City, was back on the runway with men’s and women’s clothing inspired, he says, both by L.A. gang culture and King Arthur.

"I’ve always been fascinated with that period," he said.

Is it because it is a romantic era?

The collection was a bit scary with black and white prints, including a coat of arms and stylized graphics depicting guns. He had sweeping capes, black hoodies for men, sporty loose nylon gym pants, bandannas and mini dresses for women. Lil’ Kim was in the front row.

Monique Lhuillier said she was inspired by the California lifestyle. She used lots of linen for knee shorts, safari jackets and jeans. But cardigan sweaters mixed with lace and chiffon ruffled dresses seemed a second-thought solution to what to wear on a cool night. Nicole Richie and Nia Vardolas (My Big Fat Greek Wedding) were in the audience. And Ivana Trump came, reportedly to watch her lover model in the show.

Lily Pulitzer, known for the traditional pink and green floral patterns born of a more innocent time, had a racier stance this season. The line had skinny little strapless floral print dresses, bikinis with long sweaters and colorful skimmer dresses that suburban women will love for errands and informal dinner parties.

One reporter described it as a combination of "Stepford Wives and St. Tropez."

And then consider Baby Phat. It started 70 minutes after call time. The clothes were very sexy, and in the beginning it looked like a lingerie line. A bathrobe meant to be a trench coat was slashed in half.

Some tops were so loose and unstructured models sometimes had to concentrate on holding fabric over their bosoms. The styles were drenched in eclectic details, such as layers of floating pleats and contrasting fabric insets and tabs.

Like many designers, Simmons found inspiration from other cultures, including African and Native American. The models wore ethnic prints in pleated and gathered halter-tops. Their hairpieces were braids wrapped close to their heads. Fantasy hats included a feather across one eye. For Simmons, less is a long way from enough.

This summer Simmons was arrested on charges of marijuana possession after police pulled her over for a traffic violation. She says it did not belong to her, and the case is not settled.

But to her credit she found some humor in the situation. When the models reappeared for the traditional finale, they wore glitter-trimmed T-shirts bearing her police mug shot.

Fashion watchers predicted the shirts will be a have-to-have item for fashionistas.